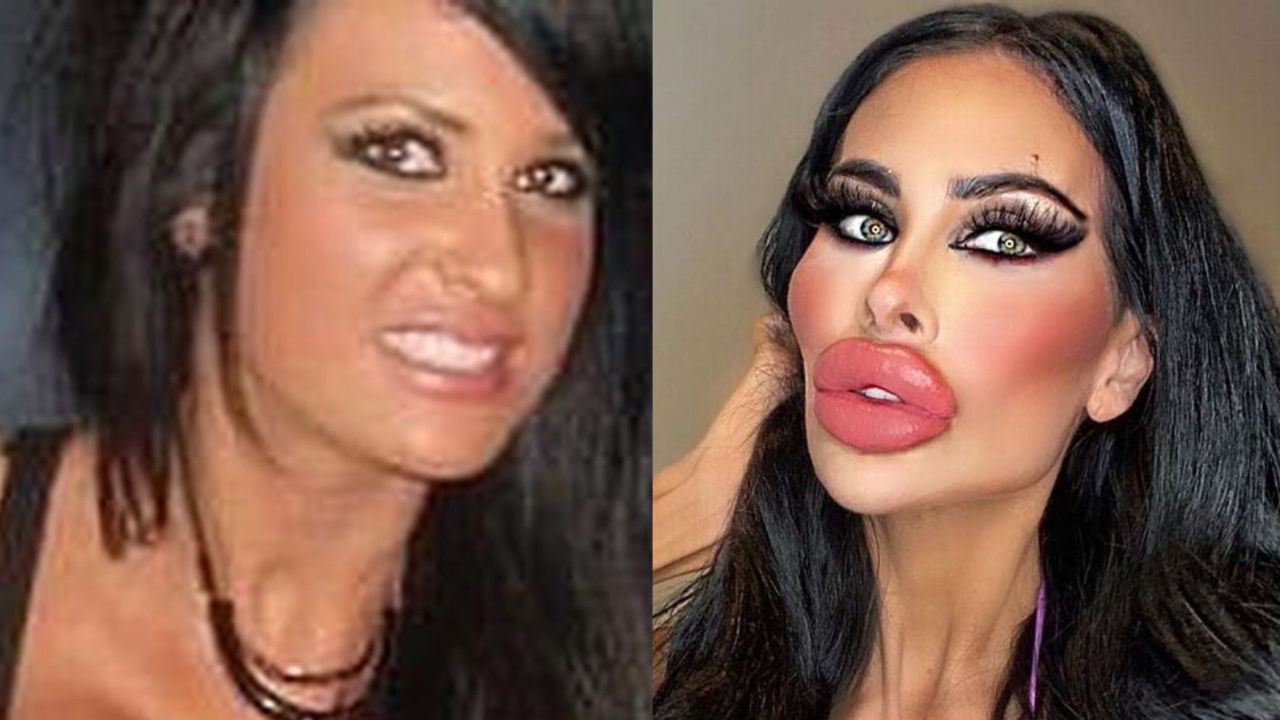 Botched star Tara Jayne McConachy’s plastic surgery includes five breast augmentations, six nose jobs, butt implants, veneers, uncountable lip fillers, and botox, all in the name of finding beauty through cosmetic surgery. ‘Tara Jayne McConaughey’ (as some fans call her) also likely had cheek and jaw fillers or implants, and rib removal surgery. She has gotten $200000 worth of plastic surgery and shows no signs of stopping even when she has been banned from going under the knife. Many fans are eager to see Tara Jayne’s pictures before plastic surgery.

After watching the latest iteration of Botched on E! I think that you will be shocked and horrified to know that Donatella Versace has a tough competition in who has gone way too overboard with all the plastic surgeries and who looks weird in a way as to specifically and I really think objectively as well (lest we be judgemental about others’ looks) mean the least like a human whilst looking like a human. Putting it tactlessly, she looks grotesque.

There is a Tara Jayne McConachy who is taking the mantle of being the face of having the most botched plastic surgery. There is not one part of her body that she has not had modified through various cosmetic procedures.

Heads to heels, she’s all plastic, filler, botox, implants, and whatnots. Her motto of life must be ‘life in plastic, that’s fantastic.’ She even calls herself a human barbie, a limited edition one because her looks are always evolving with another new plastic surgery.

Previously, we touched on the plastic surgery efforts of Tom Brady and Chaney Jones.

Botched: Tara Jayne Before Plastic Surgery is the Topic of Massive Curiosity!

Tara Jayne (@tara_jayn3) is an Australian nurse who gained fame because of her botched plastic surgery procedures.

Let’s talk about her face more specifically her lips because her lips are hard to miss given that they probably occupy like 50% of the total area of her face. It’s Tara’s verdict that lips are her statement feature. So, she likes to keep it nice and plump by regularly injecting it.

Ever since Kylie Jenner started overlining her lips that made her lips appear twice their size giving them a fuller look, the trend of full lips has taken off, and lip fillers have never been out of style. And Tara Jayne seems to have taken it upon herself to outdo Kylie because her lips are four times the normal size. There is no gap left between her nose and upper lips.

Tara’s nose also has been through a lot. She has kept on slimming her nose just like she has kept on fattening her looks. She has had a total of six nose jobs. In the end, her nose has achieved that perfection and refinedness that’s almost eerie to look at.

But however others might feel about her nose, Tara Jayne must take satisfaction in the fact that her nose is narrow and straight and her nose bridge is very slim and has no bumps.

And not to mention the countless times the model has had botox injected into her face. No wrinkles in sight on her face, plus her face does not move at all. Tara Jayne also has very high cheekbones and hollow cheeks. So, she could have cheek fillers or implants and, she also looks like she’s undergone buccal fat removal to get a slimmer face.

Plus, her jawline is very sharp and strong which could be due to jaw implants or fillers. Her face looks extremely angular with a V-shaped jawline.

Now, below her neck, Tara must be the owner of the disproportionately largest breasts. On a quest of achieving an hourglass figure, she has gone through breast augmentation five too many times.

And her waist is too cinched it looks like she has a corset pulled back by people going in opposite directions intact. Did she also have a rib removal surgery? We couldn’t put it past her. Tara Jayne’s unrealistic figures are a 37-inch bust, 17-inch waist, and 29-inch hips.

In Todd Sampson‘s headline-making documentary series Mirror Mirror about a group of Australians obsessed with having plastic surgery she once appeared in August 2021, Tara was seen complaining about the inadequacy she felt in her E-cup breasts. She has expressed that she wants to get her boobs bigger than that.

Tara Jayne had also previously featured in E! reality show Botched and attempted to convince doctors Paul Nassif and Terry Dubrow to give her bigger implants. If only we could learn to have an ambition like hers and apply it to other things, we could be living our best life.

She has stated on Mirror Mirror that there is no limit for her when it comes to plastic surgery. She is incredibly addictive and she wants bigger breasts.

Tara revealed that she has 540 CCs of breast implant silicone that she’s not happy with at all. Apparently, there’s a ‘rippling effect’ on the skin on her breasts, and hoped ‘filling out the space more’ would fix the issue. So, she has made plans to go overseas and get her breast size increased to 1500cc.

But Tara Jayne has had too many surgeries that she has been banned from it. JK, there’s no such thing as banning surgery from having too many of it. She has been banned because she is dangerously underweight at only 45 kgs; too slim to carry larger implants. Even doctors are concerned about her physical and mental health beyond and in relation to surgery.

Speaking about her plastic surgery on The Morning Show, Tara Jayne told that she thinks it’s very important for a woman to be able to express the way they feel and just express everything about beauty in this day and age.

And plastic surgery is her expression of choice and that makes her happy and gives her the confidence to be the best version of herself. If she says so. And also remember when plastic surgeons said beauty and botched jobs are two sides of the same coin! Can’t ignore that.

Tara has been estimated to spend $200,000 on plastic surgery. She has said that she spends $2000 and $5000 on her monthly visit to doctors. And looking at her track record and desire to continue, she is going to be spending a lot more overseas.

Tara Jayne recently joined the adult subscription website OnlyFans to help fund her lifestyle and future cosmetic work during the pandemic and she charges $25 for a monthly subscription. She has boasted of making $10,000 in her first three days on the platform.