Pete Davidson’s Tattoos and their Meanings 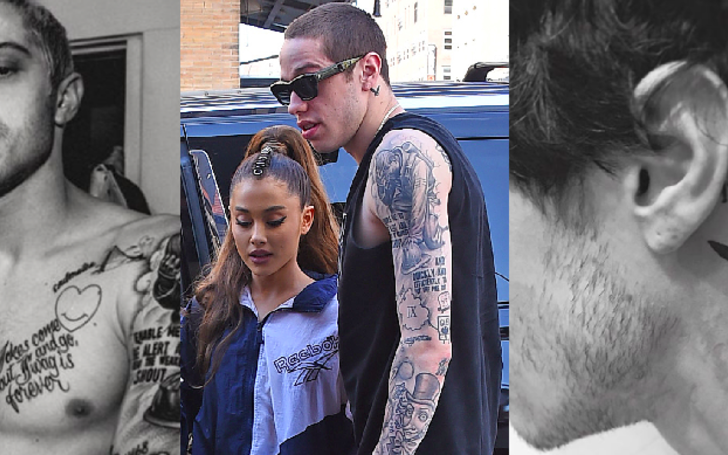 Who is not aware of the popular American comedian Peter Michael Davidson? If you don’t, maybe you’ll know him by his stage name, Pete Davidson. He first delivered a stand-up comedy with a bunch of friends while he was merely 16.

Davidson is renowned for his quirky satire and comedic style, which reflects on his life. He is a regular member on ‘Saturday Night Live’ and has also starred on the MTV shows Guy Code, Wild ‘n Out, and Failosophy.

It’s not a fresh development for public figures to get tattoos, but Pete Davidson’s coming on the radar of those famous celebs who took their inking habits to a new level.

You guys might be shocked to learn that Peter’s body has been inked with around 104 tattoos to this day.

Pete packed his body with lots of tattoos, which he could soon rise further because there are still plenty of rooms to ink a bunch of new memories. Until then, let us tell you the story behind some of Davidson’s tattoos. So, let’s get going.

Firefighter and 8418 Tattoo on Left Arm 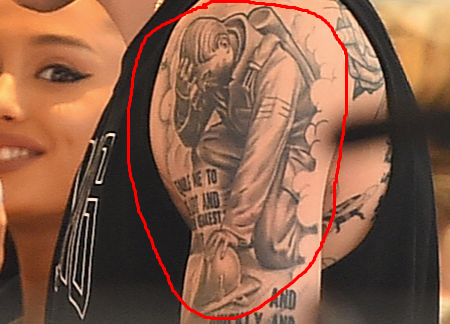 Pete Davidson inked a big ‘Firefighter’ tattoo on his left arm, paying a tribute to his late father, Scott Davidson.

Pete’s dad was a courageous firefighter who lost his life during a terrorist attack in the United States on September 11, 2001. The comedian inked a tattoo for displaying a sign of affection and homage to his dad. 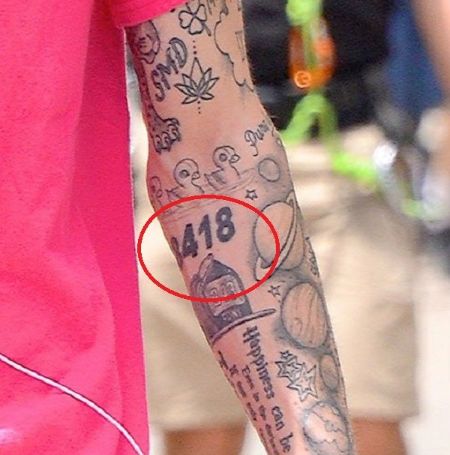 11 Behind His Left Ear 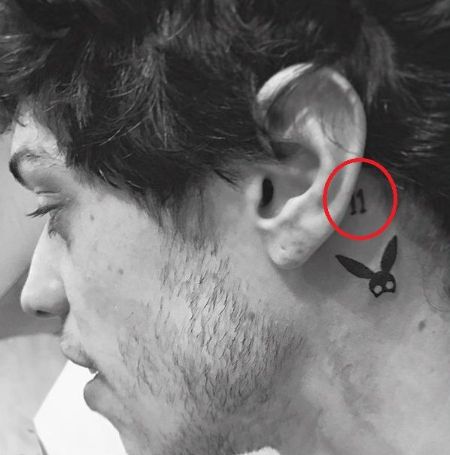 We presume you guys may already realize how much Pete cherished his father, and only two marks were not enough to signify his admiration of his late dad.

Davidson inked ’11’ behind his left ear. So, he’s not going to overlook the day his dad, Scott, quit his earthly life and went to the spiritual realm.

During an interview, Pete mentioned, “I don’t let a lot of people know about my dad dying on 9/11. It’s not a way to introduce yourself. So I never told anybody, and then I would do jokes about it… and I think people thought I was lying about it. Which would be crazy!” 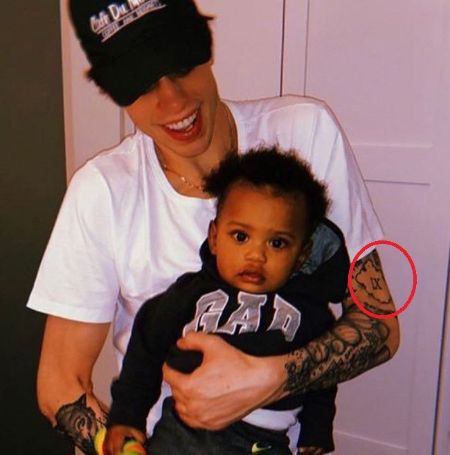 Parental love is a gift to all in this universe, however, often individuals are not fortunate enough to know such emotions.

While Pete lost his dad at a young age, Scott imprinted a massive picture of him on his heart. Peter also tattooed ‘Xx’ on his left forearm.

Indeed, the comic Pete also has another tattoo attributed to his late father, symbolic of the month he lost his dad. 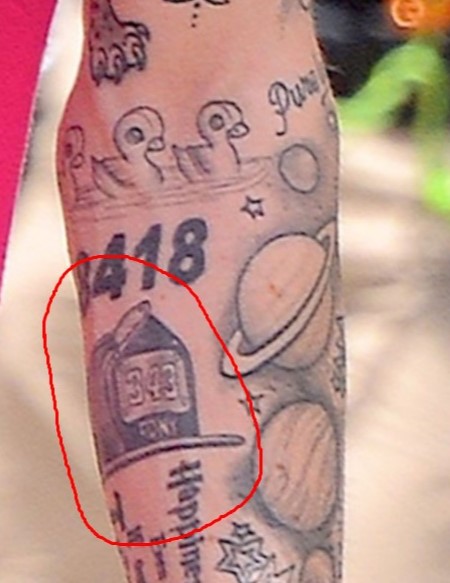 Pete got a tattoo of a firefighter hat with the number 343 on it.
Source: People

Subsequently, the American star has had a ‘Fireman Hat’ tattoo to demonstrate his love for his late dad with figure 343. 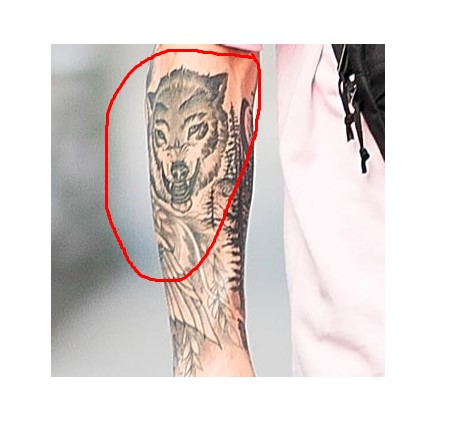 Wolf Tattoo of Davidson reflects the love and care for his family members.
Source: Cosmopolitan

Now speaking about another tattoo of the young man, Pete Davidson, he inked ‘Wolf Head’ on his right forearm. A wolf symbolizes love and devotion for the family; Pete may have done so to demonstrate how deeply he cared for his family.

Furthermore, Pete, after his dad’s passing, might carry the feeling he needs to be looking after his mother and sister as the oldest son in the house. 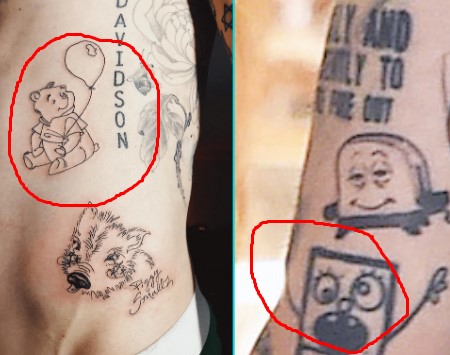 Pete Davidson got many tattoos of the fictional characters in his body.
Source: Pinterest

‘SpongeBob’ and ‘Winnie’ Pooh are some of the most popular cartoon characters. So, perhaps Pete inked those animated characters to demonstrate his fun-loving personality. 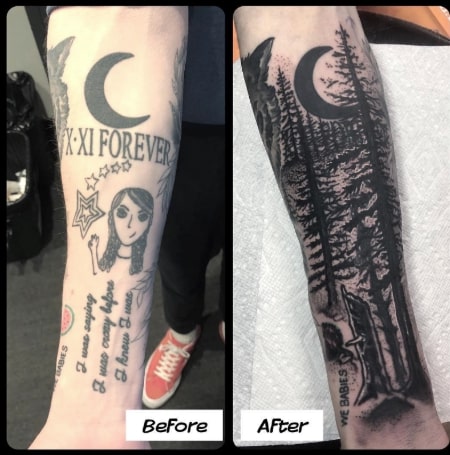 Cazzie was the ex of the comedian Davidson for whom he dedicated one of his tattoos.
Source: People

By now, we should all have the impression that Pete is fond of painting his body with tattoos to recall his memorable times in life.

Cazzie David was one of the ex-girlfriends of the actor for whom he tatted Cazzie’s sketch. After splitting with her, Pete covered it up with the ‘Giant Forest’ tattoo. 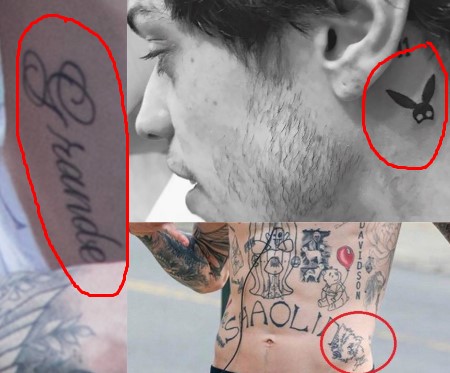 Pete Davidson expressed his affection to his ex-girlfriend, Ariana Grande, with a tattoo of her album art ‘Dangerous Woman’ on the back of his ear when the pair began dating in 2018.

As we can see, this tattoo is the way Davidson displays his feeling for the singer, for whom he once inked ‘Grande’ on the right side of his stomach during his dating life with Ariana Grande.

Also Read: Jason Momoa Tattoos, His 6 Prominent Tattoos You Should Know About!

The comic performer even marked ‘Piggy Smalz’ on the left side of his chest. According to Ariana, the tattoo is devoted to the pet pig that the pair had while they were dating. 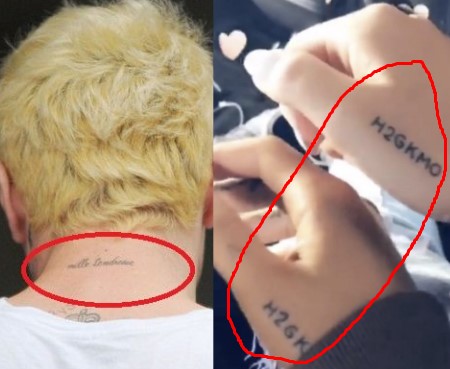 The pair of Davidson and Grande had sketched similar tattoo while they were in a relationship.
Source: Pinterest

Additionally, Pete and Ariana have had another identical tattoo named ‘H2GKMO,’ which is connected to the famous catchphrase of the gorgeous artist, Grande, ‘honest to God, knock me out.’ 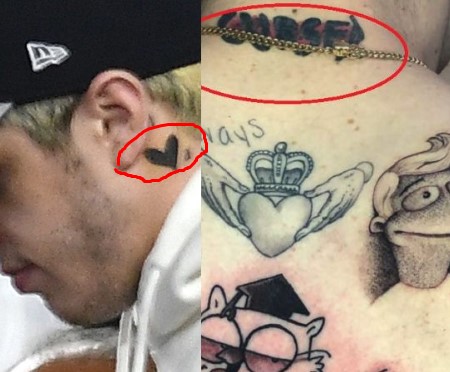 Pete modified his ‘Dangerous Woman’ and ‘H2GKMO’ tat after breaking up with his lover Ariana Grande.
Source: Insider

Later on, the couple split and Pete turned his ‘Dangerous Woman’ tattoo into a black heart. He also replaced the ‘Mille Tendresse’ tattoo with the phrase ‘Cursed.’

Davidson even concealed his ‘H2GKMO’ tattoo as he split up with Ariana Grande. 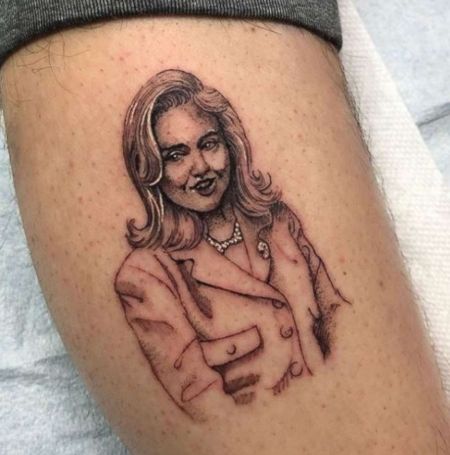 Pete showed his support to politician Hillary Clinton by sketching her portrait on his leg.
Source: ABC News

Hillary Clinton is the inspiration of the American star Pete Davidson. So, to endorse her campaign in 2016, in the U.S. Presidential race, he inked Hillary Clinton on his right leg, which was tattooed by the tattoo artist Jon Mesa.

Davidson posted the photo to his social media page with the comment, “Wanted to get @hillaryclinton a Christmas Gift, so I got a tattoo of my hero. Thanks for being such a badass and one of the strongest people in the universe. Tatt by @jonmesa.” 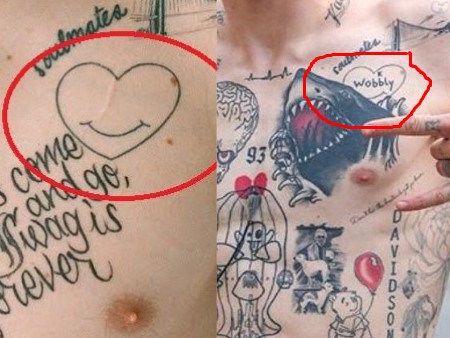 The Catholic star, Pete, used to get a smiley heart tattoo on the left side of his chest, which he then linked to the heart tattoo. After grappling with his mental wellbeing and relationship, Davidson changed the image. 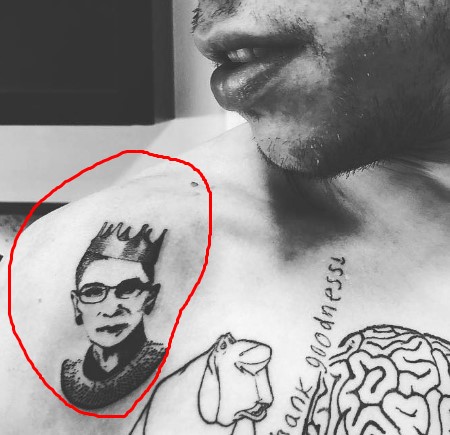 Ruth Bader Ginsburg’s portrait is inked on the body of the comedian Pete Davidson.
Source: The Blemish

Since facing ups and downs in his relationship, Peter took a break from adjusting and hiding the images of his ex. He then tatted the Supreme Court Justice, Ruth Bader Ginsburg‘s photo on his right shoulder.

The ink on Pete’s right shoulder was crafted by the tattoo artist Jon Mesa, who posted the artwork on his official Instagram page with the caption ‘The Notorious R.B.G.’ Ruth Bader Ginsburg on @petedavidson.’

93 and Flying Eagles By Jon Mesa 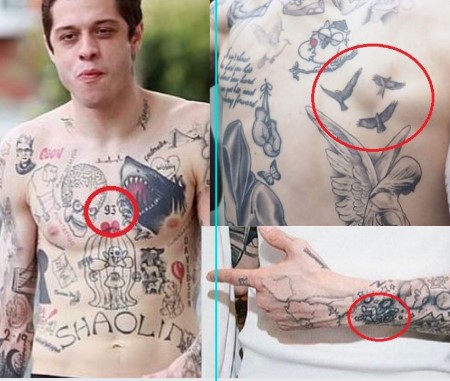 Many tattoos of Pete are tatted by the tattoo artist, Jon Mesa.
Source: Pinterest

Inking a tattoo is a huge deal since a mere error destroys the craft, making the entire process meaningless. But Pete Davidson has no fear about getting a new tattoo with the aid of his pal, Jon Mesa.

Jon Mesa is a tattoo artist who has created some of the most significant tattoos on Davidson’s body. Mesa tattooed ’93,’ which signifies Pete’s year of birth, November 16, 1993.

The tattoo painter Jon also sketched ‘Flying Eagles’ on the right side of his neck, reflecting intelligence and strength.

Check Out: Logan Paul’s Tattoos and Its Meaning, Just 1 Tattoo!

Mesa also tattooed the Astronaut image on Pete’s left wrist, a special way to show respect for NASA and other space exploration projects.