Julianne Moore's Plastic Surgery is Trending But Is It True? 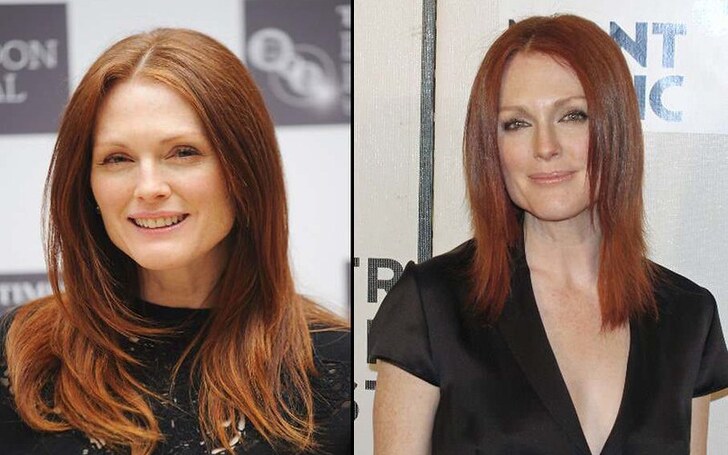 Learn all the facts about Julianne Moore’s alleged plastic surgery operations through before and after pictures.

We’re fairly used to celebrities often pursuing plastic surgery to look youthful. “New” noses and contoured lips don’t inspire us anymore. But also among actors, some ladies are not scared to age and say “no” to botox and other cosmetic enhancements.

Julianne Moore is one such celebrity who claims she’s not bothered about aging. The actress performs yoga, and she enjoys cardio exercises. Stick with us to learn more details on why this gorgeous actress is reluctant to undergo plastic surgery. 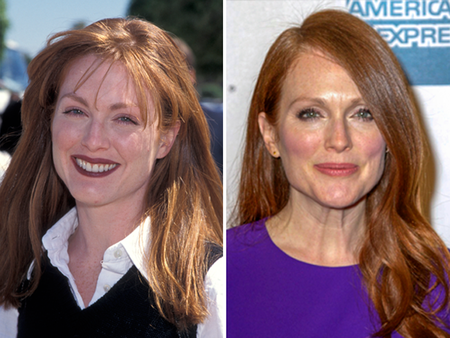 Julianne Moore does not want her face to be altered with plastic surgery. The actress is one of the most famous names in the film industry, having appeared in movies such as Far from Heaven (2002), A Single Man (2009), and Still Alice (2014), for which she landed the Academy Award.

Julianne has always kept a smooth, porcelain skin, but unlike most Hollywood actors, she maintains she never injected her face with cosmetic fillers.

“I don’t do Botox or any injectables,” the 59-year-old told Red magazine, adding she’s only undergone laser treatments for health purposes.

My first laser treatment was last winter to remove pre-cancer… it lifted off these spots, except one on my lip, which I had to have biopsied and it looked so bad, but my dermatologist said to me, ‘Well, better than losing half your lip.

To preserve her delicate face, Julianne covers whenever she's out or at the pool and usually wears sunscreen every day since she was 23 years old.

In addition to sun creams, she uses facial oils and cosmetics from L’Oreal Paris as the brand spokesperson for the makeup giant’s Age Perfect Cell Renew Skin Care range.

When speaking about aging, however, she is mindful not to make a huge deal out of the process.

I think we make women feel terrible with the idea of, ‘Oh, she’s aging!’ Well, of course, she is. So is that guy, that child, that dog. We know we’re going to move through time in a certain way – we shouldn’t make people feel responsible for it.

During the interview, Julianne also stated she was beginning to go “grey at the front” of her head and had to see her colorist Vickie Vidov every few weeks for a touch-up on her trademark dark red locks.

“Luckily, I don’t have to wash my hair very much – maybe twice a week – which helps the color stay fresh,” Moore added.

Julianne Moore is 57 years old and, essentially, she appears to be becoming more and more stunning with her age.

The glamorous redhead who’s been in the spotlight since the early 90s has consistently said “no” to plastic surgery, and considering the fact that she’s begun to exhibit a touch of aging, she looks beautiful.

Julianne has aged nicely. She’s lost some volume toward the outer eyebrow but maintained arching, which helps. It’s her bone structure in general that has helped Julianne maintain her looks. Her high, chiseled cheekbones and low brows give her square-shaped face good, defined angles.

Julianne Moore is a great example of how a lower brow position can be deemed more attractive than a high one.

Not only is Julianne reluctant to do it, she doesn’t even want to talk about plastic surgery. She’s said several times she feels there is a double standard when it comes to men and women’s aging perception in Hollywood.

In one of the interviews, Moore said:

Everything she does to remain so graceful and flawless, it appears to work without the help of a cosmetic surgeon.

Julianne Moore insists she carries no intention to undergo plastic surgery. The Still Alice actress admitted she does not feel such treatments necessarily undo the aging process and confessed she chooses to grow old naturally and let nature run its course.

In an interview with Health, the actress said:

My feeling is live and let live. Some of those procedures that make you look younger, I don't know that they really made anybody look younger. I think most of the time they make you look like you've had something done to your face.

Moore joked that aging gracefully often has its benefits since she’s not held to the elevated expectations that she faced in her prime.

The big thing about being 50 is the bar is much lower. People are like, ‘Oh my God, you look great!’ So that’s sort of good.

Back then, Moore announced she and her partner Bart Freundlich were sending their two kids to Quaker School as they believe in the values that the institution teaches.

The actress revealed she and Freundlich had exchanged vows only to give Caleb, now 22, and Liv, 18, a sense of comfort.