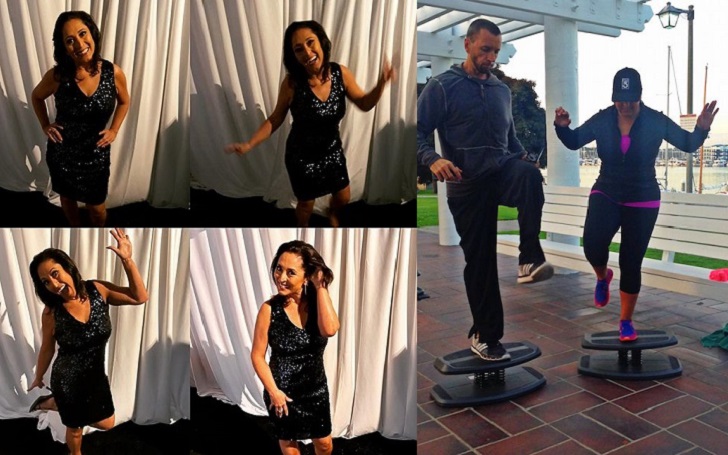 KTLA reporter Lynette Romero was struggling to share how she lost an incredible amount of weight. After a lot of requests from her fans, she finally shared the weight loss journey on air, while even bringing in a specialist to explain her method. As a result, her fans have been loving her every day since then.

Lynette Romero lost 50 lbs weight loss using 'Intermittent Fasting' since June 2019. And she appeared on a Weekend AM piece on KTLA in January 2020. She also welcomed Dr. Myles Spar to explain the proper way to use the technique. In December 2019, she posted a photo looking super slim while still keeping her weight loss secret a secret.

It took a lot of courage for her to discuss her weight loss struggles on air. Now, everyone is happy that she shared her secret with them.

Lynette Romero Struggled with Weight Loss Since the Fourth Grade

Romero was extremely silent when people asked her about her weight loss secrets because they wanted to use it for themselves too. But on occasions, she did acknowledge her fans' comments on social media, especially on Twitter, in September 2016.

Thanks Holly! You know what they say "the struggle is real" ?

On the photo from December 13 on Instagram, it's filled with comments about how awesome she looked (yes, she looked absolutely amazing) and how she achieved that. There aren't a lot of Lynette's comments. But as you dig deeper, she did reply to one user commenting on their worry for her health. But she replied positively with the answer, "I've just been really focusing on my health. It’s all good."

But, in the past, she became a little defensive when asked for her secret. "No secret, I've said a number of times that I got serious about taking care of me and my health. I'm still working on it and not really in a position to give advice. But you know I share everything and I will just please give me a chance to get to where I'm going," she wrote in the reply. Of course, she was continually bickered on regarding her weight loss journey.

But she was finally ready to share it and with the brightest smile too. Yeah, she's always the smiley one.

On the 'New Year, New You' piece on KTLA on January 12, 2020 (Sunday), she discussed how she struggled with weight all her life. The earliest weight loss diets she remembers following was in fourth grade. Since then, she's been going up & down the scale and trying out almost every diets possible. However, she found one working spectacularly for her and her KTLA colleagues.

Lynette Romero Brought in a Health Expert to Explain Her Method

On an Instagram post, she wrote a lengthy message on the caption, stating that she "was taking care of other people and not taking care of myself" for a long while and needed a change. Once, she realized she hadn't met her primary doctor since 3 years ago, one she's gone to for 20 years prior to that. It was then she knew she "was stressed, not sleeping enough, not making time to exercise and not make healthy choices".

When she got serious back in June 2019, she started doing the famous "Intermittent Fasting" method of weight loss. Since then, she lost over 50 lbs. of weight with her serious weight loss journey. After all the questions & requests from fans, she finally talked about it but also wanted to set the records straight, "A lot of people go, 'Oh, fasting. That's bad... You shouldn't do it.' That's why I didn't want to talk about it too much. Because I didn't want to encourage people to do it, and then they get sick, you know... It's not just fasting, it's just, you know, organizing it in a way that works for you."

To provide an expert opinion on her technique, she invited Dr. Myles Spar, the Chief Medical Officer at Vault Health, on the show to detail the scientific and scheduling details of the 'Intermittent Fasting' method of weight loss.

After every other method failed, this one was what finally did for Lynette. It's not only about not eating, it's about doing it without falling ill, meaning thinking about health all the way. So yeah, her excitement, of course, to share what 'Intermittent Fasting' means for weight loss is absolutely encouraging.

Watch Completely to Know What Intermittent Fasting Really Is About

Calling it the 'KTLA Challenge', she funnily made a clip in a recent Instagram story for letting people know of the challenge. "Take a spin class, do some jumping jacks, walk at least five minutes a day, and make your life better."

She seemed to have come right after an exercise routine in order to post the clip. Of course, because she was out of breath. Alongside that request, she asked her followers to also post their own weight loss journey on social media and even tag her as well. Oh, and the hashtag, #ktlafit5. The clip, was really funny, to say the least. Yes, she's been enjoying her technique.

Her fans also got on her social media pages to thank and appreciate her for sharing as well as succeeding in her weight loss journey. The comment section of the IG post about the piece was amazing, to say the least. And no matter how she looks, these fans are here to stay, continuing to love her on air.

ADVERTISEMENT
Only If You're Interested: Mia Khalifa's Weight Loss Journey