Drew Carey’s Weight Loss: 80 Pounds Loss With the Help of Diet and Workouts or Surgery? 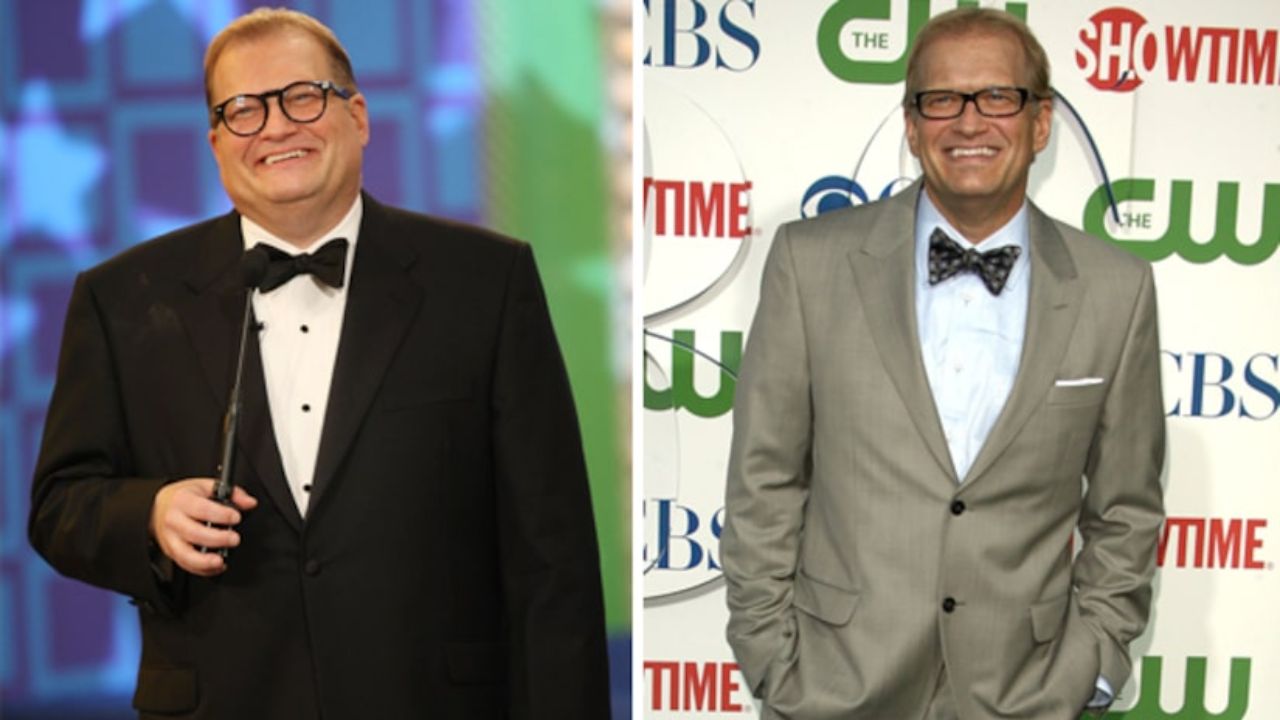 Drew Carey shocked everyone with his incredible transformation when he underwent a massive weight loss of 80 pounds in 2010. The comedian’s weight had been a matter of health concern for him as he had Type 2 diabetes and he had a family history of risk of a heart attack. In 2001, Drew Carey thought he had a heart attack which turned out to be just blocked up arteries. In 2010, he decided to take weight loss seriously and followed a simple diet and workout routine which worked out for him. He didn’t take drastic measures like weight loss surgery. In 2022, he seems to have maintained his weight.

Drew Allison Carey (born May 23, 1958) is a comedian, actor, and game show host from the United States. After serving in the United States Marine Corps, he decided to switch his career to comedy in 1985. He began his comedy career by going to the library and borrowing books on how to write jokes from David Lawrence (a disc jockey friend who had been paying Drew to write jokes for David’s radio show in Cleveland).

After winning an open mic contest the following year, he was named Master of Ceremonies at the Cleveland Comedy Club. Over the next few years, he performed at comedy clubs in Cleveland and Los Angeles. He first gained national attention as a comedian after competing in the 1988 Star Search.

Eventually, Drew Carey made a name for himself in stand-up comedy and rose to fame on ABC with his own sitcom, The Drew Carey Show. He also hosted the American version of the improv comedy show Whose Line Is It Anyway? He has appeared in a number of films, television series, music videos, a made-for-television film, and a computer game. Since October 15, 2007, he has hosted the CBS game show The Price Is Right.

Carey enjoys a wide range of sports and has worked as a photographer at US National Team soccer games. He is a minority owner of the Major League Soccer team Seattle Sounders FC, which has won the MLS Cup twice, once in 2016 and once in 2019. He wrestled briefly in pro wrestling, most notably at the 2001 Royal Rumble, and was inducted into the WWE Hall of Fame in 2011.

Drew Carey, in his comedy routine, had often made his weight gain a punchline and was not concerned about weight loss which had a lot of fans worried about his health. When he quickly gained weight shortly after he came to the comedy scene, he didn’t take it seriously at first. But he discovered that he was at the risk of having a heart attack and he also had Type 2 diabetes, which made him take weight loss seriously.

Previously, we touched on the weight loss topics of Colon Broom and Jordan Davis.

It’s not easy be it to gain weight or lose weight. Most people struggle to gain weight while most struggle to lose weight. Each and everyone has their own problems they need to face their weight problems. Not everyone seems happy with their body; some appear to be insecure about their body as they are criticized for how they look, and that’s the kind of treatment you should not do even to your enemies. Body-shaming is a bad trend!

Drew Carey (@drewfromtv) has undergone one of the most shocking and impressive transformations. In 2010, HuffPost reported that the famous host of Prince of Right had lost 80 pounds. His weight loss completely changed him. According to Carey, the secret to his diet is as simple as diet and exercise.

According to Carey, he primarily focused on a low-carb diet, which appears to have worked perfectly as he underwent a major transformation. He eliminated carbs, focused on fruits, and drank plenty of water. With weight loss, he significantly improved his health. Carey was able to lose his type 2 diabetes because he admitted that he no longer needed medication.

Before he was serious about weight loss, he had health scares a little too often for his liking. He thought he had a heart attack when he had to be admitted to the hospital in 2001 due to chest pain, according to reports. But fortunately, for him, it was not a heart attack; it was discovered that one of his arteries was blocked up which required a procedure called angioplasty to be performed. Following this heart episode, the comedian attempted to maintain his diet afterward.

While speaking about his weight loss, Drew Carey related it to his health and stated that his health was very important to him. His father had died of a heart attack when he was still in his forties. He also had type 2 diabetes which made the extra weight he had before weight loss much riskier. Carey also demonstrated that being fit is possible with the right motivation and willpower. Motivating Carey to lose weight was his desire to live long enough to see his son Connor graduate from high school.

Drew Carey also stated that he has always struggled with being a fat person. He once stated to People magazine,

“I like being skinny, I was sick of being fat on the camera. Really, I just got sick of it. Once I started losing weight, again, like once I started dropping a couple pant sizes, then it was easy cause once you see the results, then you don’t wanna stop.“

However, for the sake of weight loss, Drew Carey did not go to extreme measures like weight loss surgery instead, he relied on a simple diet plan and workout. Many of his fans were taken aback by his abrupt transformation. Carey has also been described as inspirational by his fans.

Drew Carey’s transformation was so dramatic that some of his fans had difficulty recognizing him. At a Television Critics Association press tour he attended after weight loss, some reporters didn’t recognize him and walked right past him. According to Carey, the transformation did not happen overnight because he worked very hard for 12 months.