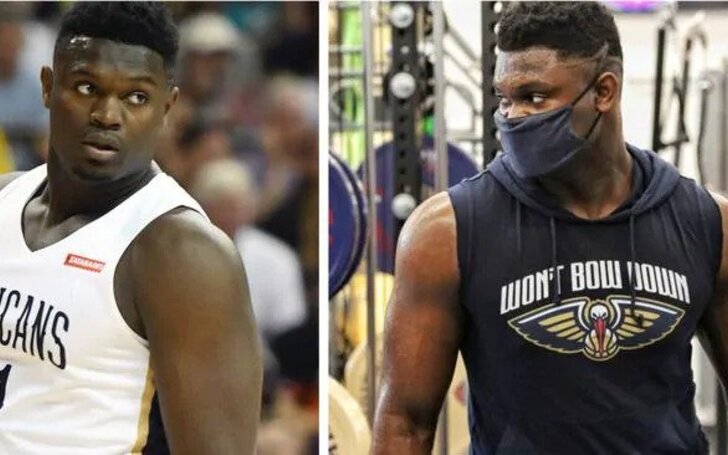 New Orleans Pelicans youngster Zion Williamson recently stated at a press conference call with reporters that he’s in excellent condition and eager to resume the season again this month.

Based on an image shared by the Pelicans, Williamson was anything but lying. Let’s grab all the details of the athlete’s weight loss journey inspired by constant criticism surrounding his physique.

If the new picture of Zion Williamson is some indicator of how he would do as the NBA season restarts, the Pelicans might make a playoff push.

Zion’s weight became a worry stretching back to his undergraduate days at Duke. This really has not stopped him yet. But some are worried that his body could reduce his playing days and restrict him to total minutes played.

There remains little doubt Zion is already the Pelicans’ face of the franchise and the future megastar of the entire firm. It seems that the former Duke icon noticed the complaints about his weight and took them to heart.

The post-quarantine picture of Zion went viral in early July 2020. The NBA rookie appears to have undergone noticeable weight loss as he looks to have shed some serious body fat. Needless to say, he seems more confident than ever to resume the NBA season in Orlando. Take a glance at Zion post-quarantine below.

Zion Williamson looks raring to go once the season starts again later in July. The Pelicans would need him to perform at his finest if they are planning to land a playoff spot.

New Orleans sits at 28-36 for the season. The team is 3.5 games back of the Memphis Grizzlies, the current No. 8 seed in the Western Conference standings. The Pelicans have eight regular-season games to make up ground on the Grizzlies.

Zion’s first game-action following the temporary suspension of the season would be against Utah Jazz on July 30. The match would be the first since the postponement of the NBA on March 12.

Zion Williamson was not going to start worrying about NBA analysts and experts who claim he ought to undergo weight loss if he wishes to have a long, fruitful NBA career.

During a podcast interview with ESPN’s Adrian Wojnarowski, Williamson said he had heard criticism of his physique his entire life.

“There’s really no comparison to me. I try to add every level to my game,” said Williamson. “My body is just built different. Some people try to look at it as a weakness, but I look at it as a blessing.

“People aren’t used to guarding this kind of size and I’m able to add a little finesse to my game so it has flavor and I’m a playmaker so I can create for my teammates and when I have to finish I’m gonna finish.”

ESPN analysts Jeff Van Gundy and Mark Jackson got some backlash on social media for questioning the weight of Williamson, who missed the first 44 games of the season owing to meniscus surgery in October 2019. During the game, the network even displayed a graphic of Williamson’s weight.

It was not the first time Williamson’s weight had been a matter of interest this year. Stephen A. Smith of ESPN claimed Nike that recruited the young star, was worried about his physical health, as per Bleacher Report in October.

“I love (his) vision and the passing,” Van Gundy said on Scott Van Pelt’s ‘SportsCenter’ show. “The quickness of the second jump. The jump shot, I don’t know. I haven’t seen him enough to know exactly what he is as a player.”

Williamson, who exploded for 17 consecutive points in New Orleans’ 121-117 defeat, finished with 22 points with seven rebounds and three assists.

“It was nice to experience those emotions,” Williamson said after the game. “I was happy to be out there and be able to run out there again, but what was going through my mind was just, ‘Be calm.’”

Fans wished to see more, but coach Alvin Gentry said he could not listen to them screaming “We want Zion! “In the last five minutes of the defeat.

“The medical people said that was it,” Gentry said, alluding to precautionary restrictions placed on Williamson’s playing time in the early days of his return to action.

“Me, personally, I don’t want any restrictions,” Williamson said. “But I’m not a doctor or a trainer, so I’ve just got to listen to them.”