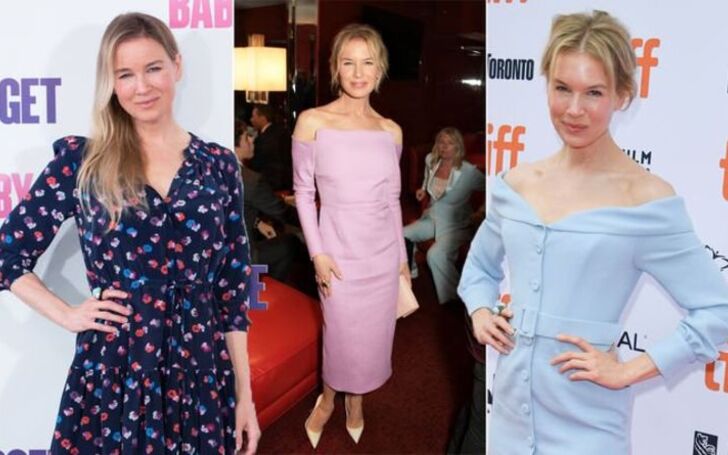 Renee Zellweger has made many headlines for her drastic weight loss in numerous parts of different films.

The 50-year-old actress starred in the Netflix suspense anthology show What/If, following a six-year break from the Hollywood business, before playing the part of Judy Garland in the biopic Judy.

As if it was not convenient to become Judy Garland, Renee Zellweger had to sing like Judy, too. You just need to read the comments of the reviewers to know about the great success of the actress in the film.

Zellweger’s opening number, By Myself, is an utter barnburner, a stunning performance that reflects not only Garland’s power but also her anxiety and daring physical tics.

Zellweger offered her finest for Judy, and she got the feedback to show it. However, Renee’s path to weight loss throughout her professional life was not without hardship. Other than dropping weight, Renee had to add a few stones for her part in Bridget Jones’s Diary.

this moment during the golden globes 2001 has to be the most bridget jones thing renée zellweger has ever done and i died when hugh grant said "renée is drunk, ladies and gentlemen" pic.twitter.com/tmZRWwD9ze

The Renee Zellweger weight gain news first emerged when the actress took on the character of Bridget Jones in 2001. She added a massive 20 pounds for the role. Unfortunately, this made her the subject of rumors on weight concerns.

Speaking to Vogue, the actress said:

I realized the influence of living in a society that focuses so much on physicality has affected me. When the film was coming out, the question I was asked the most was regarding my weight. … I was followed around Heathrow by a guy who wanted to take a picture of my backside. I don’t understand the obsession.

It was not a happy time for the starlet to appear in the news for her weight gain.

Within a year, Renee was once again the focal point on the topic of her physique when she managed to achieve weight loss for the 2001 film Chicago.

The Daily Mail’s Female section dubbed the Bridget Jones’s Diary star as gaunt upon undergoing weight loss after she had gained 20 pounds for her previous film. The report indicated that the actress had gone from size 12 to size 6 dress sizes in less than a year.

Cautioned by nutritionists about her substantial weight loss in such a short period, Renee only swept up the worry claiming she was just a busy girl who knew how to take care of herself.

I just watched "judy" and renee zellweger nailed it! she definitely deserved her oscar! BREATHTAKING! pic.twitter.com/KYPmYumG5P

The fluctuating weight of Renee Zellweger, accompanied by a number of plastic surgery reports, dispatched the actress from the Hollywood industry as she ended up taking a six-year break.

The Oscar winner in the category of Best Supporting Actress for the 2004 movie Cold Mountain recently made a return to the Hollywood business but faced a few unfinished ventures before featuring in the What/If show on Netflix.

Despite the bumpy beginning of her comeback, the Academy Awards winner was sure to receive an offer for better projects. That is exactly what happened when she was in charge of Judy’s leading role in 2019. Although the 50-year-old actress did not seem to have made any dramatic changes to her weight, she needed prosthetics to make her look like the famous singer Judy Garland.

Renee made the most impressive return with her 2019 biopic portrait of Judy Garland and won the best actress Oscar at the 92nd Academy Awards.

What is Renee Zellweger’s Diet?

When preparing for her appearance as a voluptuous Bridget Jones, Renee Zellweger apparently pecked on fatty carbs such as pie, doughnuts, snickers, and soda.

But as soon as she stopped filming, she easily spat out 4,000 calories a day’s diet along with extra weight, returning to her slim, zero-figure frame in a matter of months. Renee maintains a strict macrobiotic diet of lean seafood, pasta, and vegetables, winning her a spot on the People’s Magazine list of the 50 Most Beautiful People. She was also considered to play with The Zone, Hamptons, and Atkins Diets.

In October 2008, Renee informed SELF magazine that she heads to the gym six days a week and perform aerobic exercises, such as a five-mile run on a treadmill and an elliptical machine.