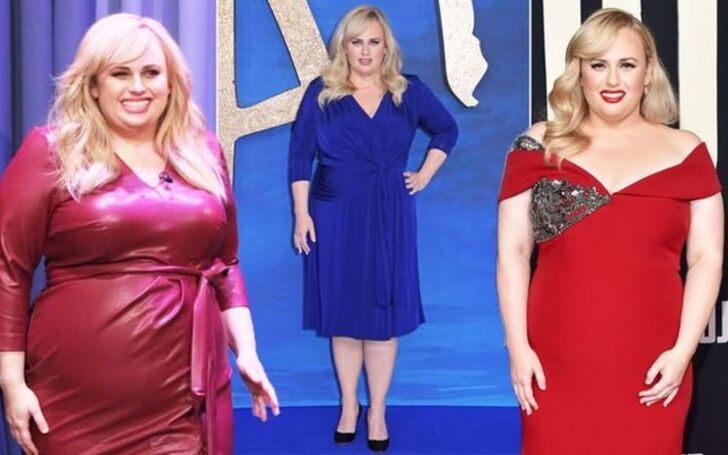 Rebel Wilson promised to reflect on her fitness and to bring significant improvements this year. And on May 26, 2020, the actress announced she had given herself an optimistic weight loss target in the coming months.

The 40-year-old Patricia Hobart star, who is typically pretty shielded about her private life, aims to drop her weight to 75 kg (11.8 stone, or 165 pounds).

Rebel Wilson looks every inch the blonde bombshell as she flaunts her 18kg weight loss https://t.co/55jWgufoyy

Rebel Wilson revealed her fitness aspirations on Instagram, disclosing her desired weight, and inspiring fans to start striving for their weight loss goals.

“Even if you have to crawl towards your goals, keep going x it will be worth it,” she shared, along with a picture of herself striking a pose while donning a matching blue loungewear set. “Try and give a little bit of effort each day…I know some days are frustrating as hell, you feel like giving up, you get annoyed at the lack of progress…but good things are coming your way.”

Rebel continued, “What are your goals this year? I’ll be honest with you guys – with my ‘Year of Health’ mission I’m trying to get to 75kg’s and career-wise am trying to get one of my movies into production before the end of the year! Both of these things are requiring a daily effort and there are constant setbacks – but I’m working hard x”

Back in January, the actress demonstrated her improvement on social media in a video with her instructor Jono Castano. From there on, she’s been serving as a big catalyst for fitness motivation as she strives to accomplish her goals.

“Okay so for me 2020 is going to be called ‘The Year of Health’ – so I put on the athleisure and went out for a walk, deliberately hydrating on the couch right now and trying to avoid the sugar and junk food which is going to be hard after the holidays I’ve just had,” Rebel wrote on Instagram at the time. “But I’m going to do it! Who’s with me in making some positive changes this year?”

Jono broke down The Hustle star’s latest fitness routine to achieve her desired weight loss and revealed that Rebel was “has been putting in the yards 7 days a week.”

“A typical week will look like this—Day 1: HIIT and mobility, Day 2: weights and resistance, Day 3: HIIT, Day 4: HIIT, Day 5: HIIT and weights, Day 6: rest period, Day 7: HIIT. We focus on plenty of HIIT circuits, but at the same time, focusing on technique and tempo,” he said of her weekly fitness plan, adding, “Results come through consistency.”

People often carry these go-to-the-gym promises at the beginning of the new year, but Rebel Wilson is clearly holding on to hers.

Back in January, Sydney-based personal trainer Jono Castano Acero shared a picture of the Australian model, stating he was pleased of Wilson for committing to her weight loss objectives.

“Friday vibes, but @rebelwilson has been putting in the yards 7 days a week! Proud of you gurl,” he wrote.

How Rebel Wilson is being compared to Adele with dietitians saying she's already lost a staggering 18kg https://t.co/ciG24k9kAu

Wilson wrote in his Instagram post towards the start of 2020 that it shall be “The Year of Health.”

“I put on the athleisure and went out for a walk, deliberately hydrating on the couch right now and trying to avoid the sugar and junk food which is going to be hard after the holidays I’ve just had but I’m going to do it!” she wrote. “Who’s with me in making some positive changes this year?”

Her weight loss wasn’t just starting this year, though. During an interview with Entertainment Tonight, Wilson said she dropped eight pounds within four days while filming “Cats,” since the location was maintained too hot — nearly 100 degrees — and the dance scenes were intense.

“These people are like, the best dancers in the whole world, so they can’t cool their muscles down or they could get an injury and they’d be out of the film … So, they’d heat up the set like a sauna so we would never cool down, but made it pretty uncomfortable,” Wilson said in the interview.

But Wilson’s weight loss was not always lauded. When shooting “Pitch Perfect” in 2012 – one of the films Wilson released to commercial acclaim – her deal clearly stated that the actress would stay the same size.

For a really long time, the actress has served as a spokesperson for larger women. In 2017, the Isn’t It Romantic star launched her first apparel collection, Rebel Wilson X Angels, tailored exclusively for sizes 14 to 24.