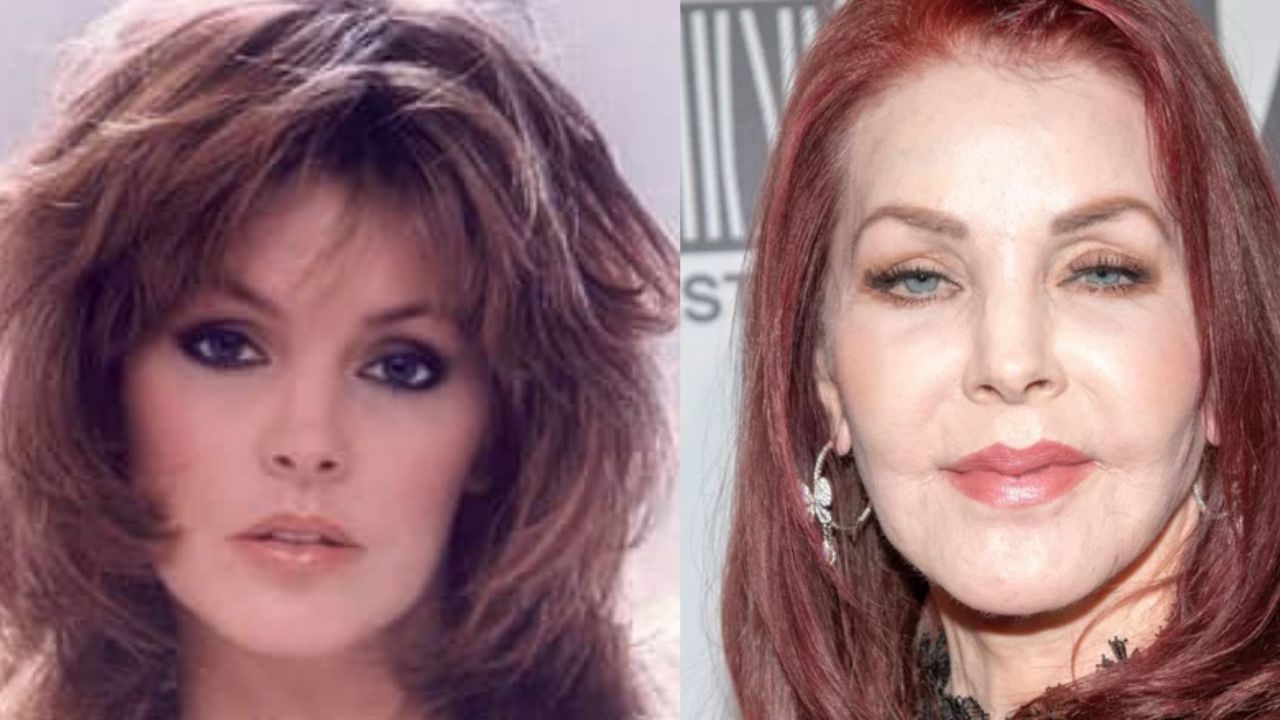 Priscilla Presley is known for her addiction to plastic surgery, notably check implants, brow-lift, nose jobs, and Botox. The 77-years-old ex-wife of the late Elvis Presley is in the spotlight again after the new movie Elvis was released. Many fans online wonder what happened to Priscilla Presley’s face as she looks completely different now as to when she was younger. Some fans claim that she had numerous bad plastic surgery treatments over the years including one with Dr. Daniel Serrano. Fans speculate that Priscilla Presley has gone under the knife many times and has had many botched surgeries including check implants, brow-lift, nose jobs, and Botox.

Priscilla Presley is the ex-wife of late Elvis Presley, the King of Rock and Roll. Priscilla has achieved success on the big and small screens as an actor and business mogul. She first gained notoriety as a result of her marriage to Presley. She was ten years younger than him, which was interesting because she was able to make him swoon immediately after their first encounter.

Before they got married, the two spent eight years dating one another. However, the couple separated after their marriage did not work out. She just started working as an actor and business mogul after getting divorced. She played the lead in a few movies, soap operas, and television movies.

She also launched her own collection of linens and fragrances. Priscilla Presley was a co-founder and chairperson of Elvis Presley Enterprises. The organization was in charge of elevating Elvis Presley’s estate, Graceland, to the status of a major American tourist destination.

With the release of her late husband’s biographical movie Elvis, Priscilla Presley is again in the spotlight among internet users. Some of her fans claim that she looks very different now and suspect her of undergoing plastic surgery. Did she really undergo plastic surgery or are the changes in her appearance just the result of aging? Read this article to find out.

Previously, we touched on the plastic surgery efforts of Simon Cowell and Karlie Redd.

The 77-Year-Old Priscilla Presley Had a Botched Plastic Surgery With Dr. Daniel Serrano; The Ex-wife of Late Elvis Presley’s Never-Ending Chase to Look Younger Led Her to Numerous Bad Plastic Surgeries; With the Release of the New Movie Elvis, She Is in the Spotlight Among the Fans!

Priscilla Presley (@priscillapresley) is in the spotlight again for plastic surgery with the release of her late ex-husband Elvis Presley‘s biographical movie Elvis which demonstrates the contemptuous bond between Elvis and Colonel Tom Parker, his manager.

Fans online claim that she looks very different now and that the 77-year-old actress looks surprisingly younger than her actual age, suspecting her of undergoing plastic surgery. Various sources online claim that she might have had check implants, brow-lift, nose job, and Botox to defy aging and preserve her beauty.

A few years ago she was in the news when Dr. Daniel Serrano injected low-grade industrial silicon similar to what car mechanics use to grease car parts inject in her face which caused several complications for her, she has verified this incident herself.

The mother of two has previously spoken out against failed cosmetic operations. Her spokesperson had previously asserted that she unintentionally had industrial low-grade silicone injected into her face; this is the same silicone that mechanics use to lubricate automobile parts. Priscilla Presley was one of several people who Dr. Daniel Serrano was known to have abused, according to the actress’ agent.

He was imprisoned as a result of an investigation that revealed his misconduct. Ms. Presley resolved this issue years ago, and everything is good right now. After completing 18 months in federal prison, Serrano who wasn’t even authorized to practice medicine in the United States was deported to Argentina. Some of his injections left his patients’ faces with tumors, paralysis, and holes.

Online admirers and critics speculate that she may have undergone a number of procedures, including Botox on her forehead and fillers on her cheeks to prevent wrinkles. They assert that she might as well have had a facelift since, according to the internet, the 77-year-old actress is making a lot of effort to fight aging and that it is negatively affecting her appearance.

Priscilla Presley allegedly became increasingly interested in plastic surgery after being diagnosed with skin cancer, according to various media sources. According to the publication, following surgery to remove malignant tissue from her nose, and later she was suspected to have undergone a nose job because her nose appeared significantly different.

Online supporters claim that now she looks like a completely different person and that she has limited expression on her face due to all the bad plastic surgery that she underwent. A Priscilla admirer tweeted in 2020 that she was disappointed in the choice to undergo so much plastic surgery:

Why someone as naturally beautiful as Priscilla Presley felt the need to ever go near plastic surgery and spoil herself? She was easily one of the most beautiful women on the planet, just such a shame!

According to Life and Style, unfortunately, Priscilla’s appearance has declined in part due to factors other than cosmetic surgery. Dr. Daniel Serrano’s controversial Beverly Hills patient received an injection of industrial low-grade silicone into her face, and her cancer treatment changed her face significantly.