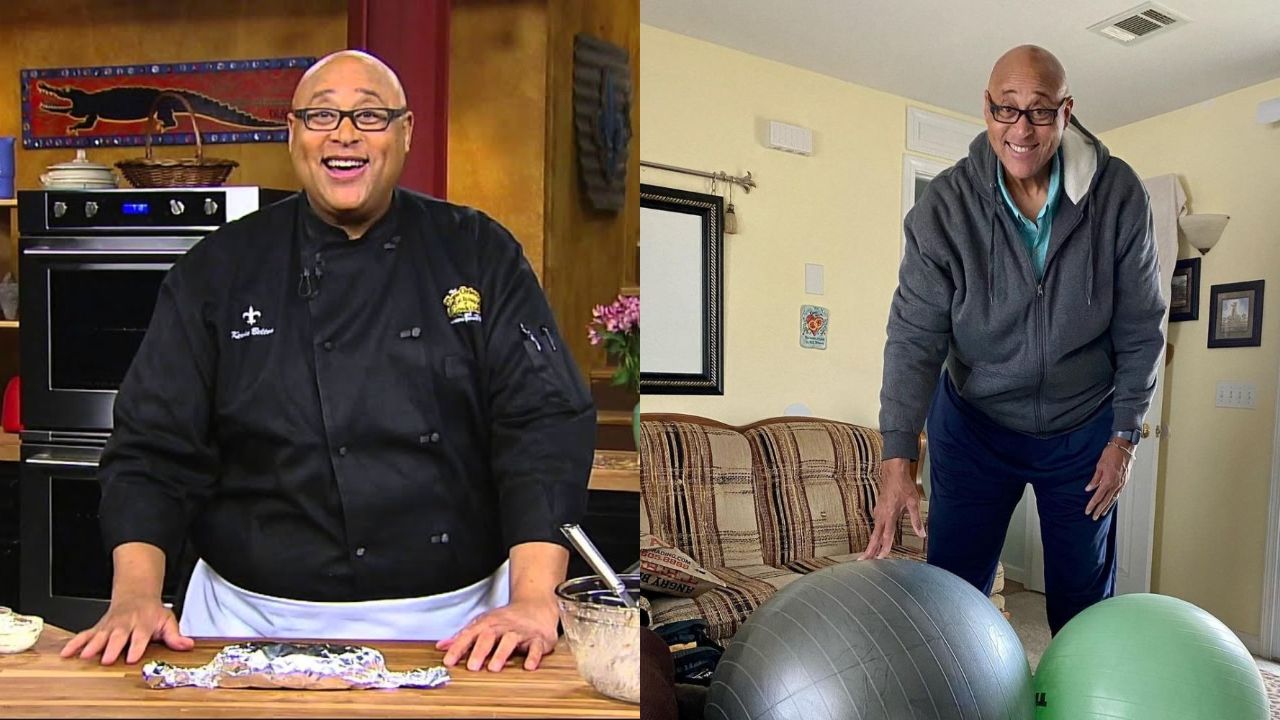 Grab all the details of the famous chef Kevin Belton’s weight loss journey, diet plan, and fitness routine. Check out his amazing before and after transformation.

The chef from New Orleans, Kevin Belton is a lecturer at the New Orleans School of Cuisine, author of three cookbooks, and a renowned TV celebrity.

Thanks to his massively successful professional life in the limelight, Kevin has earned millions of fans across the globe. And as a consequence, his visible weight loss has also become a hot subject in the mainstream.

If you’re someone who is curious to know how Belton managed to shed such an incredible number of pounds, you couldn’t have arrived at a better place.

American chef Kevin Belton appears to have shed a lot of weight over the past few years. And his fans are eager to learn his weight loss techniques that made him drop as much as 130 lbs. 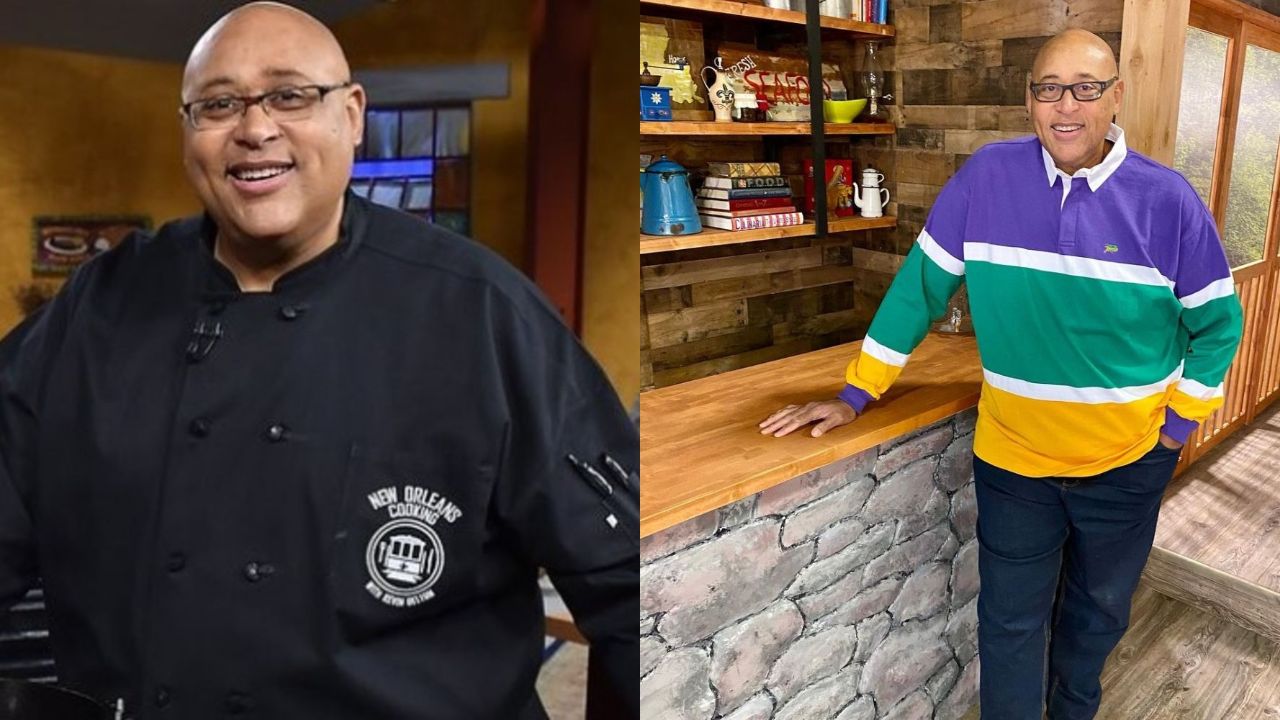 The WYES-TV presenter, Kevin Belton, went on a quest for a slimmer physique a few years ago and has lost more than 130 lbs of weight during that time frame. This has naturally brought curiosity amongst fans over how he managed to achieve such a remarkable feat.

Back in September 2019, Kevin took to his official Twitter account to discuss his fashion adventure when some fans wondered if he had lost weight and used gastric bypass surgery to achieve it.

To this, Kevin disclosed that the keys to his weight loss were regular exercise with his wife, a low carbohydrate diet, and smaller servings.

$34 at @DestinationXL not an outlet. It has taken me over two years but I’ve lost 130lbs. I exercise everyday with my wife & puppy Cookie Monster. I eat low carb (not no carb because that’s just not for me)& a lot smaller portions. It’s taken a long time &been hard but worth it.

There was another revelation about his bodily change but on a different social media platform this time. He posted pictures of his clothes on Facebook that he was donating after losing weight.

A number of fans began to comment on the post, which contains more than 200 comments to date. When one of them inquired about his dramatic change in physique, he revealed he was diagnosed with a severe prediabetes health condition along with increased blood pressure.

This prompted the chef and his wife to strive to change his well-being, and they altered their lifestyle for good.

Another fan on Facebook dropped a comment, sharing his own journey where he lost more than 270 lbs to get to 195 pounds. Belton, subsequently, shed further light on his health and a need for the change in how he lived his life.

I had to do something about it. It’s been over two years, and I still have some left to go, but my doc said I could easily have added 10-20 years to my life. And I feel so much better.

Likewise, the popular chef also disclosed his weight loss secrets to another fan. When addressing her query, he stated that it was all workout, portion size, and low carb that led him to lose over 100 pounds.

How Did Kevin Belton Spend His Quarantine?

The entire world got shaken by the unprecedented COVID-19 pandemic in 2020, and because of this, everyone was urged to follow social distancing protocols.

Chef Kevin Belton stayed at home and abided by the guidelines for months. Kevin resides with his wife, Monica Belton along with their two children, Kevin Belton Jr., and Jonathan Belton.

Additionally, their pet dog Cookie Monster is also a part of their family. Kevin spent the lockdown sharpening his skills as a chef and spent lots of time working out at home.

Health, fitness, and physical wellbeing are at the top of the priority list for Kevin Belton, and we can definitely take inspiration from it.

Kevin Belton is undoubtedly an elite man in the kitchen. He features on WYES and WWLTV morning shows equipped with the trinity, a contagious laugh, and a great sense of humor.

The suave chef was also seen in the sections of Vogue magazine back in September 2019 alongside gorgeous models, singer Jon Batiste and participants of the Mt. Kingdom chorus, among others, in a celebration of New Orleans culture.

I am in the September issue of @voguemagazine THE VOGUE MAGAZINE!!!! The one with @taylorswift13 on the cover. Can you believe this??? #sonotkidding #soflattered #honored #voguemagazine #thislifeiswildandawesome #cheflife #crazycool pic.twitter.com/VXJSc67SJ1

Speaking on his first memory of cooking, the chef said:

I remember my mom starting to cook onion, celery, and green pepper and then her going between the refrigerator and pantry to figure out what she was going to prepare while the Trinity was cooking.

Belton then revealed the first thing he learned to cook was scrambled eggs.

When asked about what he learned about cooking from his family while growing up, the chef said:

In fact, my wife had heard me say “love is my secret ingredient” and she stamped it on a sterling silver spoon that I always have with me because that is what I feel is most important.

Belton further disclosed he rarely ever cooks at home since his wife, Monica, does all the cooking and she’s got several dishes that are pretty comforting to him and his stomach.