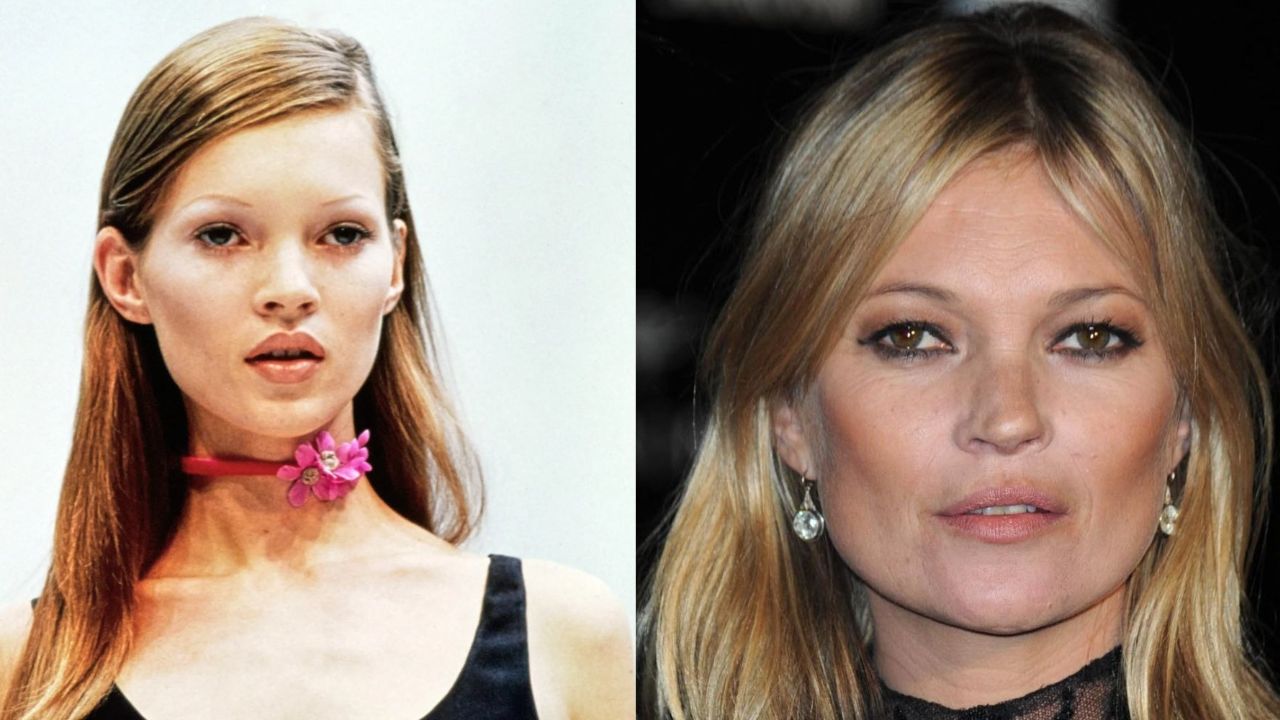 Kate Moss has once again been the subject of plastic surgery speculations following her testimony at the Johnny Depp-Amber Heard defamation trial. The supermodel is believed to have undergone Botox, rhinoplasty, and lips and jaw fillers after comparing before and after pictures which are photos of her when she was young and her photos now. Then and now, Kate Moss doesn’t look much different and still looks quite youthful and if it is due to plastic surgery, she has not once admitted to it.

Katherine Ann Moss also known as Kate Moss (born on 16 January 1974) is a British model and businesswoman who reinvented the industry in the 1990s with her waifish body and natural look, and eventually became a cultural icon. Kate’s collaborations with Calvin Klein lifted her to the level of a fashion icon.

Moss who has her own clothing line, is a contributing fashion editor for British Vogue and has been involved in musical ventures. The 48-year-old entrepreneur has received numerous modeling awards, including the 2013 British Fashion Awards, which recognized her contribution to fashion over a 25-year period. Time magazine named her one of the world’s 100 most influential people in 2007.

Kate recently testified in the Johnny Depp–Amber Heard trial and came into the spotlight after this testimony and the viewers are now making speculations about her plastic surgery. So, are the allegations true? Let’s find out!

Previously, we touched on the plastic surgery efforts of Alice Gainer and James Charles.

Kate Moss’ Plastic Surgery: The Supermodel Is Suspected of Having Botox, Fillers, and Rhinoplasty!

Kate Moss (@katemossagency), a British model, who also happens to be the ex-girlfriend of actor Johnny Depp, one of the most loved and sympathized people right now, has 1.3 million followers and a large and engaged fan base on the social media platform, which she joined through her modeling agency.

Rhinoplasty is one of the plastic surgery operations that her supporters believe she has had. Rhinoplasty, also known as a nose job, is a type of cosmetic surgery operation that allows an individual to change the shape of their nose. When comparing her before and after images, it can be observed how her nose has transformed from who it was previously. Her nostril is currently more refined and thinner.

Kate Moss’ supporters believe she has had countless other plastic surgery, especially facial alterations after comparing her old and new images. It is clearly noticeable that her lips are plumper than normal in her most recent images. A lip filler could help you achieve this. People started to notice a difference between her most recent photographs and those made for the Wonder Advertising marketing campaign.

It’s also usual for a woman in her late 40s to have wrinkles and lines on her face, yet Kate Moss’ wrinkles are virtually unnoticeable. There are no wrinkles on her forehead, for example. A wrinkle-free face can also be achieved with a healthy diet and lifestyle, however, it is not uncommon for celebrities to rely on Botox to remove wrinkles. Kate Moss has also been asked if she has had Botox, although she has yet to respond to any allegations concerning plastic surgery.

Because her razor-sharp, perfectly symmetrical cheekbones haven’t changed one bit till now, Kate Moss is believed to have had a plastic surgery procedure where she got everything under her eyes filled by expert hands using smaller amounts that are more thinly spread to give a very natural look. She is also suspected of having some fillers right in the back corners of her jaw to help lift it a bit and facial fillers overall.

Kate Moss was recently seen in a testimony related to her ex-husband Johnny Depp’s high-profile lawsuit, and whether she used plastic surgery treatments or not, she looks fantastic for a lady her age.

After Kate Moss’ Testimony In The Court, Johnny Depp Wants To Be Friends With Her!

After Kate Moss testified for Johnny Depp in his $100 million defamation case against his ex-wife, Amber Heard, Johnny is apparently trying to rekindle his friendship with Kate. The 1.7m tall businesswoman turned up to support her ex-boyfriend during one of his recent London shows following the trial.

After a jury concluded that Heard defamed her ex-husband after publishing an op-ed for The Washington Post in 2018 about her experiences as a survivor of domestic abuse, the Pirates of the Caribbean star won the trial. Kate Moss was also recently seen leaving a music venue on Tuesday night after Depp’s performance with rock star Jeff Beck. According to the sources,

“Johnny met up with Kate backstage at the show and he didn’t know she was coming so he was very surprised to see her there. They hugged and he thanked her for participating in the trial.”

The supermodel was pulled into the seven-week trial when Heard made a passing reference to her during one of her depositions. According to Heard, there was a rumor that Depp had shoved Moss down the stairs, and she claimed it occurred to her during an alleged confrontation with her ex-husband.

Kate Moss, who appeared in court virtually, told the court about the moment her ex-boyfriend came to her help after she fell down the stairs in Jamaica when they were on vacation. When questioned by Depp’s attorney Benjamin Chew, Moss claimed,

“No, he never pushed me, kicked me, or threw me down any stairs. He carried me to my room and got me medical attention.”