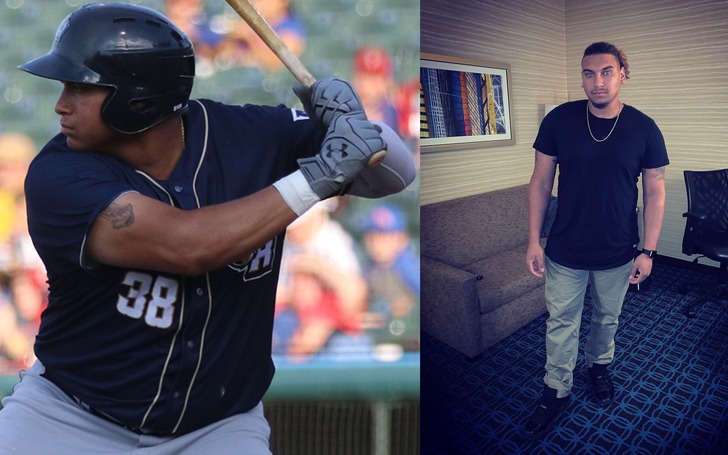 Born on 22nd June 1997 in Mississauga, Ontario, Canada, Josh Naylor is the first baseman and outfielder for the Cleveland Indians of MLB.

Naylor was the 12th overall pick in the 2015 MLB draft and made his league debut with San Diego Padres in 2019. Cleveland Indians acquired his services following a trade in the 2020 season.

Lately, fans appear curious to learn about Josh Naylor’s changing physique. Did he undergo weight loss? How many pounds did he lose? Let’s find out.

Josh Naylor, who made his MLB debut for San Diego Padres in Canada in May 2019 ending the season with a.249/.315/.403 score, said he didn’t know how much of a weight loss he had undergone in the winter, but he went well below his advertised weight of 255 lbs.

I don’t look at numbers. I don’t look at it because numbers play a game in your mind, you see a number you don’t like and you try too hard and you hurt yourself.

Naylor, who stands at 5 feet 11 inches tall, set out to slim down in anticipation of what is supposed to be his first full-league season and strive to play in the outfield.

The sturdy 22-year-old demonstrated surprising agility last season but was still a little lurching as he sped through the outfield, where he switched from first base in 2018.

I planned on getting in shape. But not like this.

Consuming a bowl of oatmeal, Naylor claimed portion control was a significant factor in achieving weight loss along with an intensive fitness schedule.

Playing in the Dominican kickstarted the weight loss, he admitted with a laugh.

That started it. It was tough to eat there. You’re not used to that food.”

Ballparks have served to boost his continued outfield knowledge.

First jumps are big down there because the fields are a lot bigger, and the field conditions are not as good.

Josh insists you need to get out of your position quickly and get to the ball.

Back in February 2019, San Diego Padres fans discussed how Josh Naylor looks to be in the best shape of his life after undergoing noticeable weight loss.

I thought he was smoking a cig at first… Boy looks great! Cant wait for spring ball!

Damn Naylor shedding some serious weight. The kicker will be if he can keep it off. If he does and can play even average D in the outfield, his bat will take him far.

I was just about to make a post asking about what shape him and Franmil were in. If either of them manage to get into shape and improve their mobility in the OF, we’d have one hell of a player. Looks like Naylor’s already on it!

Well, shedding some weight and getting in shape clearly worked for Naylor, who made his MLB debut three months later against Toronto Blue Jays.

Making his way into the 2020 MLB Postseason, Cleveland Indians All-Star shortstop Francisco Lindor informed his team if they want to be acclaimed, it’s time.

It would be an underestimate to say the 23-year-old MLB star began with a sensational start in Cleveland’s American League Wild Card Series versus New York Yankees.

In his first five plate appearances, Naylor scored five hits, as he cemented himself as the first person in MLB history to begin his career in such a manner.

Left-handed Naylor’s momentum started in Game 1 earlier in the week when he got 4-for-4, including two doubles and a home run in the Indians’ 12-3 defeat.

With Cleveland potentially getting knocked out in the best-of-three series, Naylor did the best he could to keep the hopes alive, getting a 2-run RBI double off Yankees pitcher Masahiro Tanaka in the bottom of the first inning before adding on a Roberto Perez single to aid the Indians to leap to a 4-0 lead.

Cleveland signed Naylor at the MLB Trade Deadline in August as one of the members of the six-player package during a trade-off for San Diego Padres pitcher Mike Clevinger.

In 22 matches with the Indians during the regular season, Josh Naylor reached a.230 average (.556 OPS) in addition to three doubles and two RBIs.