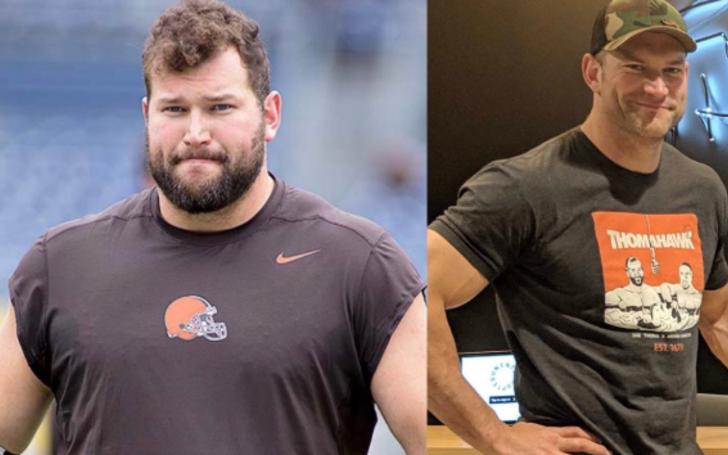 Ten years of crashes in the NFL trenches started to take a toll on one of the best offensive linemen in the history of the NFL, however owing to serious knee injuries, the then-Cleveland Browns superstar was unable to play or perform regularly.

Sure, he might take painkillers to get through matches, but he wouldn’t be able to compete effectively if he weren’t able to maintain the same fitness level as his teammates.

Joe Thomas required a new way of maintaining his cardiovascular fitness. The former athlete credits swimming as the platform that aided him to achieve almost 60-pound weight loss since he retired from the NFL.

Use the Retweet button as a round of applause for @joethomas73 incredible transformation. pic.twitter.com/JkquDuRRN4

Former Cleveland Browns left tackle Joe Thomas made an incredible transformation upon shedding some serious pounds merely a year after he retired from the National Football League.

Joe is well conscious that his weight loss has been the focus of much speculation following his retirement from Cleveland Browns in 2018.

There is fairly harmless reasoning for the transformation: Thomas is no longer shoving around huge men for a living, so he has been able to minimize his caloric intake dramatically.

During his playing days, however, Thomas wasn’t always all that fit. In reality, his 325-pound playing weight might be more shocking than his off-season weight loss transition since then.

There have been other post-retirement improvements, such as the blood tests he took, which revealed a host of food intolerances, and the swimming exercises he took for cardio.

Yet much of the time, not eating 7,000 calories a day has triggered the stunning before and after images that you might have come across social media.

What is Joe Thomas’s Diet?

If you give much attention to Joe Thomas’ Twitter account, you’ll hear more than just his podcast and his performance on the NFL world.

The former Cleveland Brown’s offensive lineman will demonstrate the diet he’s been having that helped him lose more than fifty pounds. A lot of photos of protein and vegetables.

When the before and after pictures surfaced all over social media, Joe finally let the cat out of the bag. He tweeted: Two easy steps. Stop eating breakfast and stop eating carbs.

Meanwhile, there’s more to it than his tweets claim. He combines the ketogenic diet with intermittent fasting.

Keto is a low-carb, high-fat diet that has enabled several athletes to shed a lot of excess weight. It shifts the metabolic rate to the use of fat for fuel rather than depending on carbs.

Joe claims he only feeds between noon and six in the evening.

The diet helped him drop 25 pounds during the first month, but he acknowledges it was a challenge to achieve the desired weight loss.

He also continues to stick to 1,500 to 2,000 calories per day for food items that are slow to digest, such as meat and fiber vegetables, to keep him full.

That’s not half of it, though. He’s swimming 30 to 45 laps twice a week, the perfect exercise for joints that were utterly battered throughout his career with the Browns. He performs yoga, too, and he’s maintaining a weightlifting routine.

Thomas admits to having cheated on the diet when he’s going out with friends or family, but he performs workout in advance to counter extra carbs.