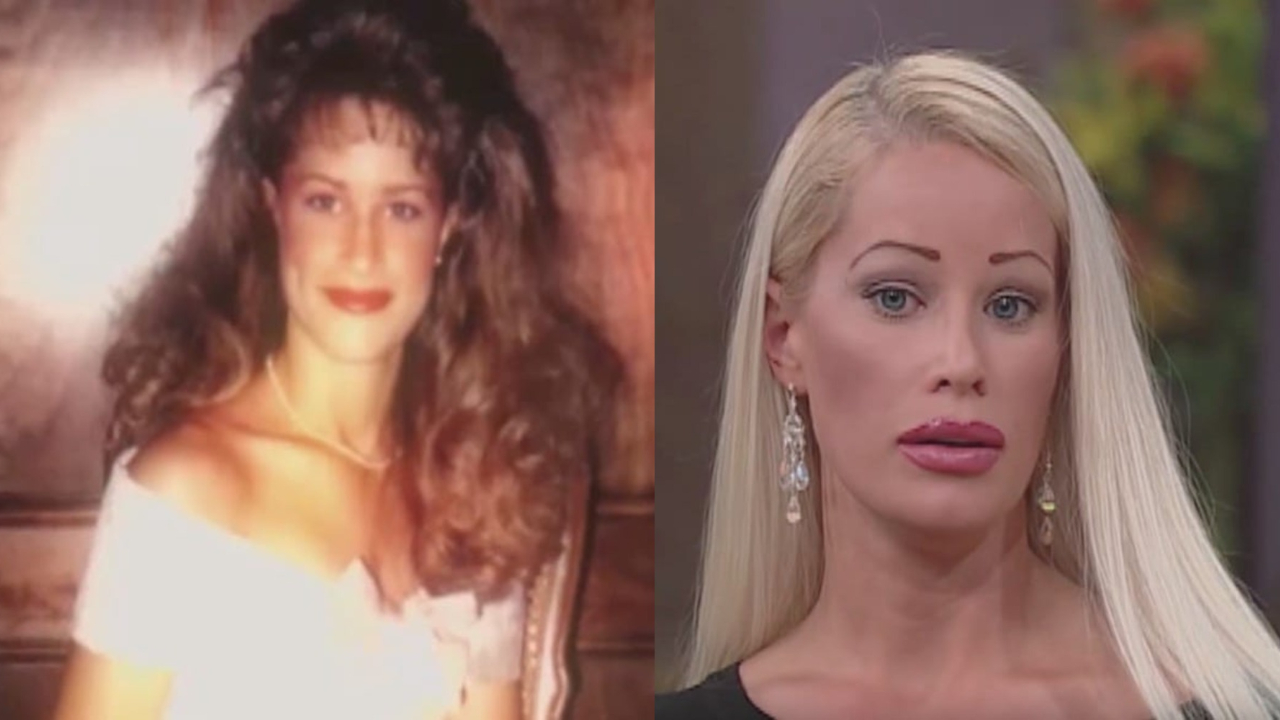 Jenny Lee Burton’s plastic surgery procedures are beyond crazy. She went under the knife a whopping 59 times! Check out her before and after pictures.

Right when you thought she’d hit an all-time low and gave up her addiction to plastic surgery, real-life Barbie Jenny Lee Burton revealed she had over twice the number of cosmetic surgery operations than before.

Back in 2004, Jenny Lee confessed to Oprah Winfrey her battle with low self-esteem led her to disdain the face gazing back at her in the mirror – even after 25 treatments.

She was angry she had altered her look too dramatically. Not only because she was so disappointed with her appearance, but as a result, her daughter couldn’t even recall what her mother’s natural appearance looked like.

Jenny Lee Burton’s Plastic Surgery – She Went Under the Knife a Whopping 59 Times!

When plastic surgery freak Jenny Lee Burton appeared on The Oprah Winfrey Show back in 2004, she shared her fascination with the procedure and admitted to performing more than 25 operations. 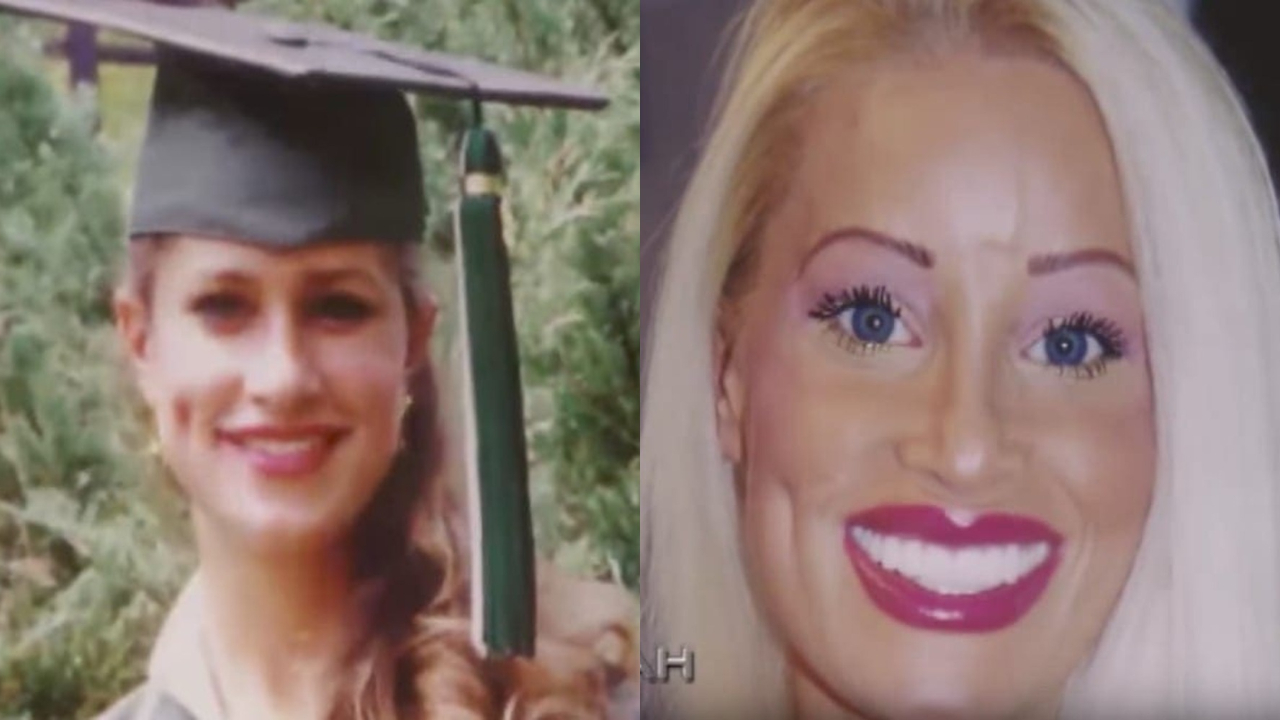 Back then, Lee confessed to Oprah she had been dealing with low self-esteem for a number of years, something she was facing to that day.

When I look at my reflection, I still don’t like what I see. I’m trying to grow to accept what I see… If I could be just OK with it — just OK — I would be very happy.

Lee also spoke up about how her fixation with surgical procedures had impacted her daughter Kaleigh, who was 10 at the time.

Her whole life, I’ve been having plastic surgery, so she doesn’t even know what I look like as a natural person.

When my daughter sees pictures of me before I had any surgery, she doesn’t recognize that that’s me. We don’t even look alike.

Since the show aired on TV, Lee subsequently quit getting plastic surgery, but the escape did not last long.

Oprah: Where Are They Now? spoke with Lee and discovered she had performed 33 more operations, which include a circumferential body lift in her 20s.

The birth of her daughter at the end of 2007 put another hold on Lee’s plastic surgery aspirations, but she sought cosmetic enhancements soon afterward.

In addition to undergoing what she termed a “body lift revision” in 2010, Lee claimed her fourth rhinoplasty (in February 2008) was intense.

But Jenny is anything but happy. She was hospitalized with a debilitating fibromyalgia condition and she began enduring a difficult battle with her weight.

They had told me that weight gain was… a side effect of having [fibromyalgia]. I had to really come to terms with the fact that, for once in my life, I’m not in control of my body.

As her weight increased, Burton’s self-esteem went down.

I look at some pictures and go, ‘Whoa, I was really thin in some of those pictures. I was the healthiest and the happiest at that time.’ I miss those days.

In the video, Lee also opened up about speaking to her eldest daughter about going under the knife, as Kaleigh expressed her own feelings about her looks and whether she wants to pursue cosmetic procedures of her own.

It felt like Jenny was about to quit altering her look, but almost seven years later, on the episode of Oprah’s “Where Are They Now,” Jenny revealed she had lost her way and had opted for 33 additional treatments, taking the overall number up to an incredible 59.

Before conducting an operation, surgeons go to extraordinary lengths to decide if plastic surgery is chosen for the correct reasons.

Failing to identify an internal struggle in the patient could lead to a lifetime of addiction to plastic surgery as they continue to search for that one procedure that will make them happy. We call this body dysmorphic disorder.

This is the case for Jenny Lee Burton, who acknowledged she would be glad if she could be okay with her look, “just OK,” she insisted.

Sometimes the patient is aware that their self-esteem or body image issues are more than skin-deep, while others are in such a state of denial that their symptoms don’t exist.

This is why the consultation is the single most important aspect of successful plastic surgery.

Consultations allow the practitioner and the patient to achieve a better view of each other’s perceptions and whether cosmetic procedures is the solution.

Also See: Olivia Jade’s Plastic Surgery is Trending But Is It True?

As a physician, my goal is to improve the well-being of my patients, not set them up for a lifetime of struggle and regret.

Performing a plastic surgery procedure on a patient who has mental turmoil would be the same as giving a recovering alcoholic their first beer, knowing that they just graduated from A.A. – it’s that serious.

If you’re eager to go under the knife, for instance, breast implants or liposuction, but are not sure if you’re choosing it for the correct reasons, it’s best to consult expert professionals before you dive into it.

There’s no question going under the knife 59 times will definitely have an effect on your life. Jenny Lee Burton, who is now cutting a distinctly fuller figure due to the condition, said:

I am in constant pain, all the time, every day, 24 hours a day, seven days a week.

She’s seen her fair share of cosmetic surgeries and the discomfort that comes with it and fibromyalgia at the top is overwhelming.

When asked if she’d like to have plastic procedures again, she said it wasn’t right after all that.

Jenny also told her child to stay away from her mistakes. She was eager to make sure her daughter would never have to go through the same misery.

She’s beautiful the way that she is and personally I would prefer that she don’t do anything to change that.

It’s difficult to have a decent relationship with a woman who’s obsessed with artificial enhancements, but her husband’s perception of all of this didn’t change her relationship in any shape or form.

Plastic surgery and all the sufferings are reserved for Burton and have not impacted her daughter and her husband.