Eddie Hall Before and After Weight Loss: Here’s How He Lost 40 Kg! 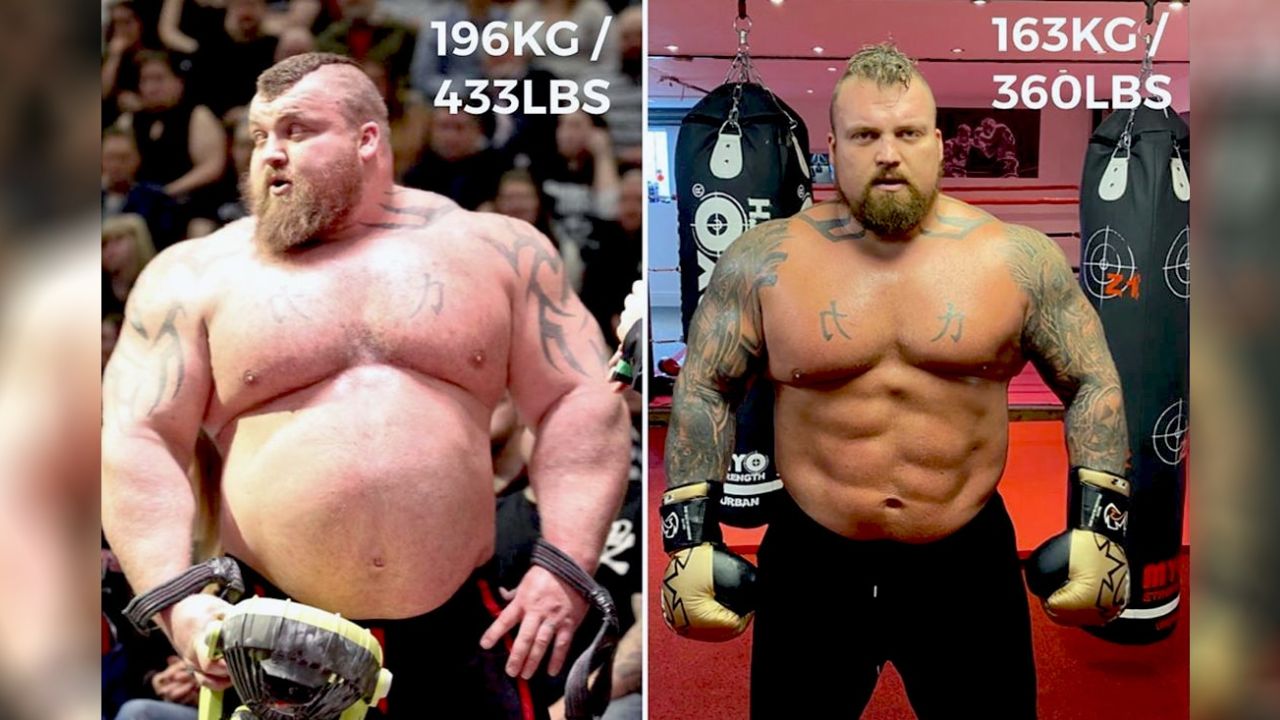 A Strong man with legendary titles to his name, after years of being in weight lifting competitions and boxing, Eddie Hall retired at the age of 32 and is now into weight loss to prevent possible health risks. Check out Eddie Hall before and after 40kg weight loss thanks to a change in diet plan and workout routine. The Beast’s weight was over 400 pounds when he lifted 500kg.

A man who has lifted as many titles as he has lifted weights, Eddie Hall is a man of honor! A boxer and a former professional strongman, Hall is one of the well-renowned faces in not just England but the world. With his entire life spent on bodybuilding and physique, Hall’s weight loss has been one of the most talked-about topics!

Beginning his journey through competitive swimming, Eddie got into bodybuilding while he was working in a garage. Back in 2008, the star bodybuilder entered the strongman circuit, having done a strongman competition at the Iceman gym in Stoke-on-Trent, Staffordshire.

Soon Hall finished first at the UK’s Strongest Man 2011 competition, and the rest is history. After years of being swole, Hall’s recent jacked physique stunned many. So, here are all of Eddie Hall’s weight loss secrets.

Previously, we touched on the weight loss efforts of Nicola Coughlan and Seth Gilliam.

Eddie Hall’s Weight Loss: What Did the Star Bodybuilder Do to Lose 40 KG Weight?

Spending most of his life in bodybuilding, weight-lifting, and heavyweight, Eddie Hall has been heavy most of his life. Following 2021, the athlete began his weight loss journey.

Bandying his heavyweight sessions and his diet surely contributed, but Hall revealed that it was something else that actually helped him quite the amount of significant weight.

Looking at Eddie Hall from a few years back and now, the strongman surely lost quite the weight and underwent an insane transformation. Jacked physique with a whole lot of abs, Eddie is currently in his best shape and his fans too believe that Hall has come a long way.

It wasn’t just a change in his diet and workout routine that helped Hall lose 40 kgs. In an interview with Men’s Health, the star revealed that the secret to his new thin and dashing figure is his mile-and-a-half morning walks.

Posting a picture of himself while on his running routine, Hall quite often shares his weight loss progress and the joy of his transformation on his Instagram.

“I would say the biggest change for me is adding in daily walks, just every day getting up in the morning and walking a mile and a half. Some mornings I run and some mornings I walk, but every single day I get up and do a mile and a half, and I take my dog out.” says the strongman to Men’s Health on his walk routine.

He revealed that he doesn’t really take his walk as a routine but does it whenever he feels like doing it. A simple walk every morning really did wonders for the bodybuilding legend.

In addition to his physical routine, a belly-busting diet too added to Eddie’s incredible transformation. A 7000 calorie diet plan coupled with an intense training session led Eddie to acquire a healthy physique.

Hall has also dedicated himself to studying the art of a new sport, in addition to grueling daily cardio and high-intensity interval training (HIIT) sessions. In an interview with Express UK, Eddie revealed, “Because of my size and the intensity of my training program, I have to eat a lot.”

Hall also shared his workout regime on his YouTube channel which shows the amount of vigor of his will and strength. Also filming his progress, Hall has inspired many through his entire transformation journey.

Losing His Grudge, Eddie Hall Called for a Rematch Against His Nemesis Thor ‘The Mountain’ Bjornsson!

On March 19, 2022, Thor ‘The Mountain’ Bjornsson defeated Eddie Hall in what was dubbed the “Super Heavyweight Boxing Match”. Surprisingly enough Eddie “The Beast” demanded a rematch right away.

The exhibition bout lasted the full six rounds, and Hall sent out an Instagram message for his fans saying, “Just want to thank everyone for the love and support tonight. It was fun to box literally one of the biggest men on the planet ??No excuses at all from me just tonight the better man won. Well done to Thor and hope everyone’s staying safe ?? Big Love. Team Beast”

Following his fight against Bjornsson at the Dubai Duty-Free Tennis Stadium, Hall was left with a serious eye cut, ending a five-year animosity between the two men. Bjornsson apprised Hall saying that he must complete a charitable donation and get a tattoo in order to add a further chapter to their rivalry and earn a sequel as per The Sun.

“We could definitely take a rematch, I would be happy to do so but he has to do things that he promised,” says Thor to The Sun. You can soon be expecting another match between the two legends!