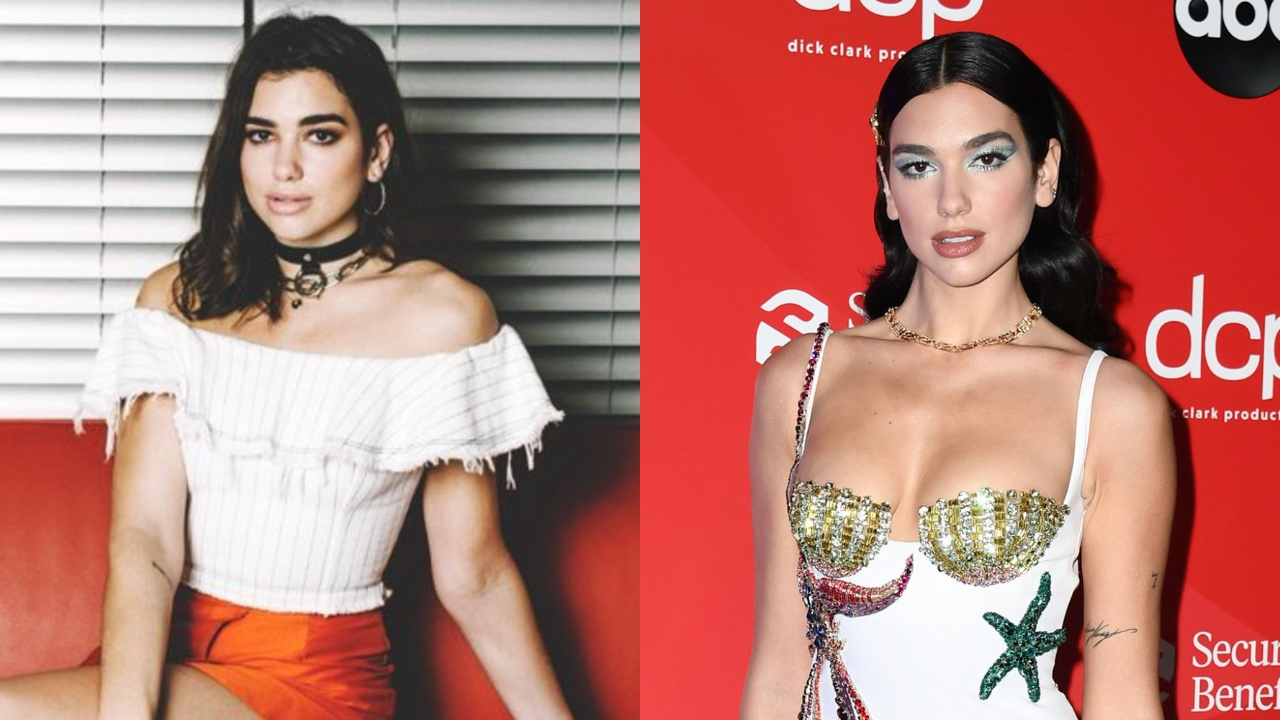 Learn all the facts surrounding Dua Lipa’s alleged plastic surgery procedures. Fans believe she’s had breast implants and a nose job. Check out her before and after pictures.

We don’t reckon there’s a single individual in the world who hasn’t heard of Dua Lipa or does not at least know someone who is familiar with her.

With three BRIT awards and six Grammy awards nominations to her name and an infinite influx of pop songs, Dua is ruling the world!

With incredible fame, however, comes microscopic attention. As she’s gotten more popular, people are getting more and more curious about Dua Lipa’s personal life. Recently, she’s at the forefront of plastic surgery allegations.

Dua Lipa‘s plastic surgery speculations are gathering pace lately. Numerous fans are heading to search engines to look for information about her alleged cosmetic endeavors. So, is there any truth to her going under the knife?

It’s normal for top celebrities to be the subject of countless rumors and Lipa is no exception.

She is an incredibly popular English pop singer who won two Grammys in the category of Best New Artist and Best Dance Recording for her hit single Electricity (2017), a collaboration with British-American supergroup duo Silk City. 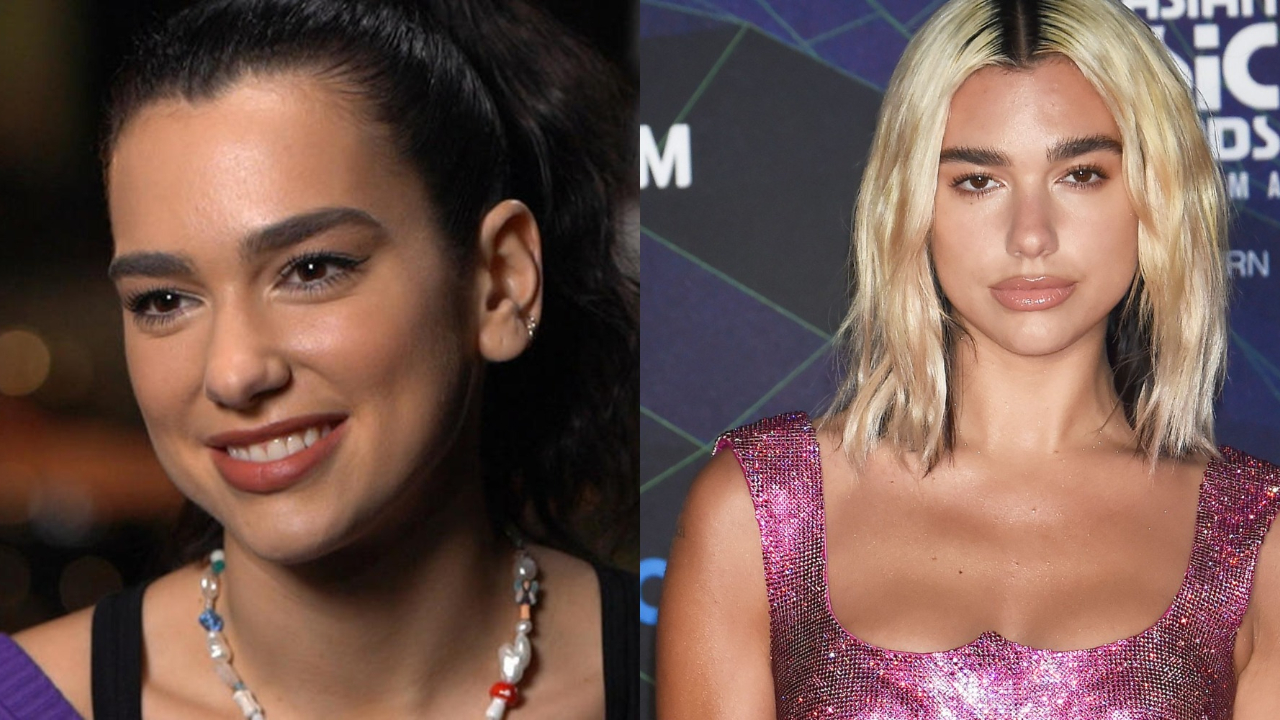 Dua Lipa is at the forefront of plastic surgery speculations on the internet.
Image Source: Weight & Skin

Before she gained mainstream stardom, she served as a waitress while residing by herself in London at the age of 15. By sharing covers on YouTube, she initially made headlines.

Born to Kosovar parents, her family shifted to Kosovo from London when she was 11 years old. She was influenced by her musician father, Dukagjin Lipa, to pursue a career as a singer. She’s got a sister called Rina Lipa, and a brother named Gjin Lipa.

When it comes to her romantic life, she started dating Anwar Hadid in 2019. She had previously been in a relationship with Paul Klein, frontman and the lead vocalist of the synthpop trio LANY, and Isaac Carew, a British model & chef.

Coming back to her plastic surgery accusations, there’s no concrete proof she ever went under the knife. Her stupendously good looks and perfect features, however, give the impression that she made some cosmetic enhancements.

The common consensus seems to be Dua Lipa – who is also the subject of weight loss – performed breast implants and a nose job aka rhinoplasty. Judging by her before and after pictures, this does hold some weight to an extent.

Until Lipa herself addresses these rumors, fans won’t stop speculating. But don’t hold your breath because this gorgeous diva is unlikely to break her silence anytime soon.

Even if she does speak, she will likely credit her makeup and skincare routine for her flawless appearance.

Back in March 2018, Dua Lipa would not let anybody go on with misinformation about her latest surgery that caused the pop star to cancel a series of Bruno Mars opening act performances, following her clap back to the reporter at the time.

As the story unfolded, the singer had just gotten rid of her wisdom teeth and it’s not a nice time for those who have had the surgery before.

However, after witnessing her latest vibrant performance on Jimmy Kimmel Live, journalist Richard Wilkins failed to polish up his research and launched a dig at the singer!

On Channel 9 News, he said:

Well get this — she was supposed to be in Australia opening up for Bruno Mars at his 24 Karat world tour and had to cancel due to having her wisdom teeth out. But here she is on Jimmy Kimmel Live!

Although she may have been on the rebound, this didn’t halt the pop sensation from hitting Wilkins with a tweet that was also followed by a shot of her swollen post-surgery mouth.

Do Not Miss: Olivia Culpo’s Plastic Surgery is Making Rounds on the Internet

If you were a good journalist you would’ve done proper research instead of talking out of your ass. Jimmy Kimmel was shot in Feb in La and aired yesterday. I’ve been in Australia on bed rest and wouldn’t have canceled my Bruno shows if I didn’t have to.

And as the sh*t hit the fan, the reporter backtracked and instantly sent an apology to the singer for his error.

Sincere apologies @DUALIPA. Didn’t mean to misinform. Assumed you were live with Jimmy K. your fans and my son have severely castigated me!

Sincere apologies @DUALIPA. Didn't mean to misinform. Assumed you were live with Jimmy K. your fans and my son have severely castigated me!

It’s fair to say, you don’t mess with Dua Lipa!

Back in late November, Dua Lipa’s ‘Studio 2054’ online concert turned out to be awesome, but how successful was it?

Early estimates from the organizers indicated this was a massive success, with more than 5 million projected views. However, there is a figure that needed to be broken down.

Over 1.9 million unique log-ins from China, 95,000 from India, and 263,264 tickets sold across the regular ticketing platforms.

Tickets were sold differently based on where you purchased them: the £8.99 that the Music Ally team spent when they came in early might imply total profits of £2.4 million at the minimum level.

But they did not have the details on how the 263k sales were divided, nor about the monetization of viewing in China and India.