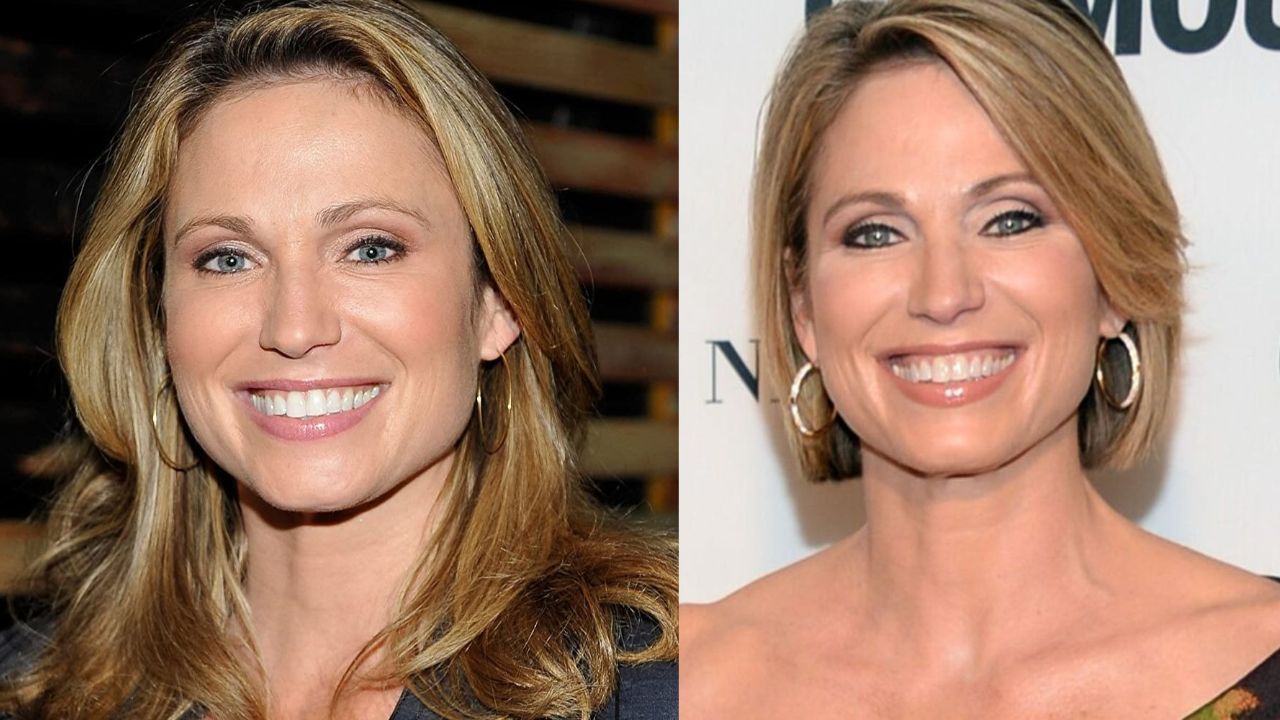 Amy Robach does not appear as though she has undergone plastic surgery because mostly she looks the same in the photos from the past, just older. However, the Good Morning America anchor does have a very strong jawline which many think is due to jaw fillers. Amy Robach is also suspected of having Botox and a facelift but she has not addressed all these plastic surgery speculations yet.

Amy Robach is an American television reporter for ABC News. She currently serves as the co-anchor of 20/20 alongside David Muir. She has been doing it since May 2018. She is also the breaking news anchor/fill-in anchor for Good Morning America. She got 20/20 Prior to that, she used to be a national correspondent for NBC News. She also has co-hosted the Saturday edition of NBC’s Today, and has been an anchor on MSNBC.

Lately, she’s been out of sight and in the news because her affair with her co-anchor has been splashed everywhere. With the public eyes on her intensely judging and scrutinizing her, plastic surgery speculations cannot come as surprise. People believe she has had a facelift and Botox done. Has she? Let’s find out more about Amy Robach’s plastic surgery!

Also, would you like to take a look at the plastic surgery efforts of Heidi Montag and DJ Pauly D?

The last three days can’t have been good for Amy Robach because somebody leaked the photo of her holding hands and cozying up with her GMA co-anchor TJ Holmes and a day later, it broke out that her divorce from her husband Andrew Sheu has been finalized. Now, it might have been a good thing because as per some sources, she split from her husband in August and she is now in a happy relationship with Holmes. But because the public was unaware of it, all of this turned into a PR disaster.

In the midst of this chaos from which it is highly unlikely that Amy Robach is coming out looking good, I’m sure she does not even care about all the plastic surgery speculations going on about her. Some celebrities hate such speculations about cosmetic procedures but Amy has bigger problems right now to give it any thought.

As for the rumors, though there is not much difference in the photos of the GMA anchor from before (no changes in the shape of her nose, her lips, and cheeks) and she mostly looks the same, just older, people just don’t think she has avoided plastic surgery altogether. They are determined to find out one procedure she’s done and I think they got one.

Some people suspect Amy Robach has gotten a facelift and Botox as well. But it really does not look like that. She has a few wrinkles and her forehead is not too smooth. Maybe the littlest dose of Botox tastefully done. As for a facelift, her face does not have that snatched look that plastic surgery gives you. So, most likely not.

Either way, these are just speculations because the television reporter has not addressed these plastic surgery rumors. She has not even addressed her affair with TJ Holmes yet. Don’t expect her to make revelations about what plastic surgery she has gotten or maybe do because that could be a distraction.

But now, Amy Robach may not have had COSMETIC surgery but she definitely had plastic surgery when she underwent breast reconstruction surgery. On October 13, when she did a routine mammogram for Good Morning America, she was diagnosed with stage 2 invasive cancer. The doctor discovered that she had a malignant tumor in her right breast.

She immediately underwent surgery – a double mastectomy – after which the doctors found out that there was a second tumor in the same breast and some abnormal cells in the left breast which had spread to her sentinel lymph nodes, meaning that mastectomy was not the end of it.

Amy Robach had to have eight chemotherapy sessions that she found to be very draining physically as well as emotionally before she had breast reconstructive surgery. Due to the size and location of the tumors, surgeons were able to save her nipples. Expanders were placed where the removed breasts once were. They stayed behind the chest muscle and stretched it out till the implants were put in during a second surgery.

Care to visit Weight & Skin for more exciting stories about your favorite celebrity?